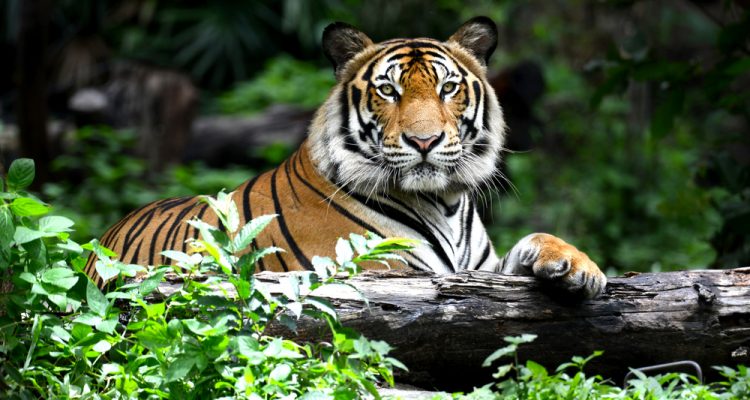 Shere Khan, the tiger who hunted Mowgli the man-cub, may have actually been onto something.

When Rudyard Kipling published The Jungle Book in the early 1900s, close to 100,000 tigers could be found roaming Asia. Since then, the tiger population has dropped by 96 percent, to fewer than 4,000 cats. Poaching is listed as the most significant threat to the survival of tigers in the wild.

One of the biggest markets for tiger parts is in China, where the Convention on International Trade in Endangered Species found they are being used “less as medicine and more as exotic luxury products.” Once used in traditional Chinese medicine to treat various maladies, tiger pelts and skeletons are now sought after by the audaciously wealthy to be used as high-end decor and for making “bone strengthening wine,” respectively.

Roving poachers set up outside India’s 50 tiger reserves, laying jaw traps to capture cats who outgrow the protected areas and seek their own territories.

“No tiger can escape from these traps,” says Nitin Desai, WPSI’s central India director. Once the cat is caught, “poachers spear it in the throat to silence it. Then they club it to death with sticks.”

International cartels trafficking in illegal wildlife targeting tigers, African elephants, and rhinos have gained prominence around the world. The United Nations Environment Program valued the illegal wildlife trade at $15 to $20 billion a year, ranking it fourth in the world’s illegal activity after guns, drugs, and human trafficking.

The Indian police and WPSI have been working with limited funds to curtail this trend to protect the majestic cats from extinction. Kuttu Bahelia, the notorious leader of a family of roving poachers descended from a centuries-old tribe of expert hunters, has been captured. From 1990 to 2013, he and his clan reportedly killed hundreds of tigers and leopards in the Indian states of Maharashtra and Karnataka. He had been arrested in 2015, but escaped into the forest using the old “I need to use the bathroom” trick after a court appearance.

Then, in late November of last year, the fugitive and his gang were tracked near India’s Nepalese border, a major trafficking route to China. The group scattered and ran off, but Kuttu was caught.

Shere Khan would have been proud.