Tiny crab robot is smaller than a flea • Earth.com 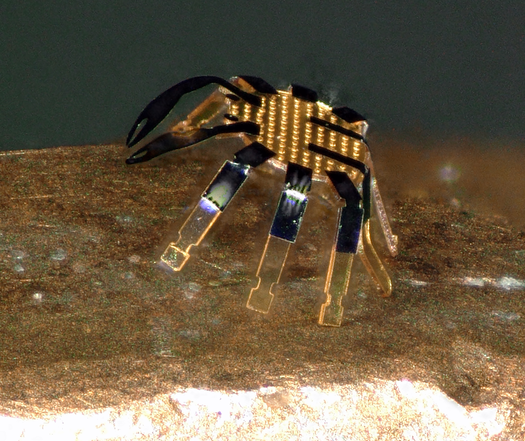 Engineers at Northwestern University have created a tiny robotic crab that walk, bend, twist, turn, and jump. Smaller than a flea and just half-millimeter wide, it is the tiniest walking robot ever invented.

The experts have also developed millimeter-sized robots that resemble inchworms, crickets and beetles. The research is just exploratory at this point, but the researchers believe their technology may bring the field closer to realizing micro-sized robots that can perform practical tasks inside tightly confined spaces.

Last year, the Northwestern team introduced a winged microchip that was the smallest-ever flying structure made by humans.

“Robotics is an exciting field of research, and the development of microscale robots is a fun topic for academic exploration,” said John A. Rogers, who led the experimental work. “You might imagine micro-robots as agents to repair or assemble small structures or machines in industry or as surgical assistants to clear clogged arteries, to stop internal bleeding or to eliminate cancerous tumors – all in minimally invasive procedures.”

According to Yonggang Huang, who led the theoretical side of the study, the technology enables a variety of controlled motion modalities and can walk with an average speed of half its body length per second. “This is very challenging to achieve at such small scales for terrestrial robots.”

The researchers constructed the robot using a shape-memory alloy material that transforms to its “remembered” shape when heated. As the robot transitions between deformed and remembered shape and back again, this creates locomotion.

A laser is used to activate and remotely control the robot. In addition, the laser scanning direction also determines the direction that the bot will walk in.

“Because these structures are so tiny, the rate of cooling is very fast,” explained Rogers. “In fact, reducing the sizes of these robots allows them to run faster.”

The research is published in the journal Science Robotics.