Trade war between the US and China may prompt Amazon deforestation • Earth.com 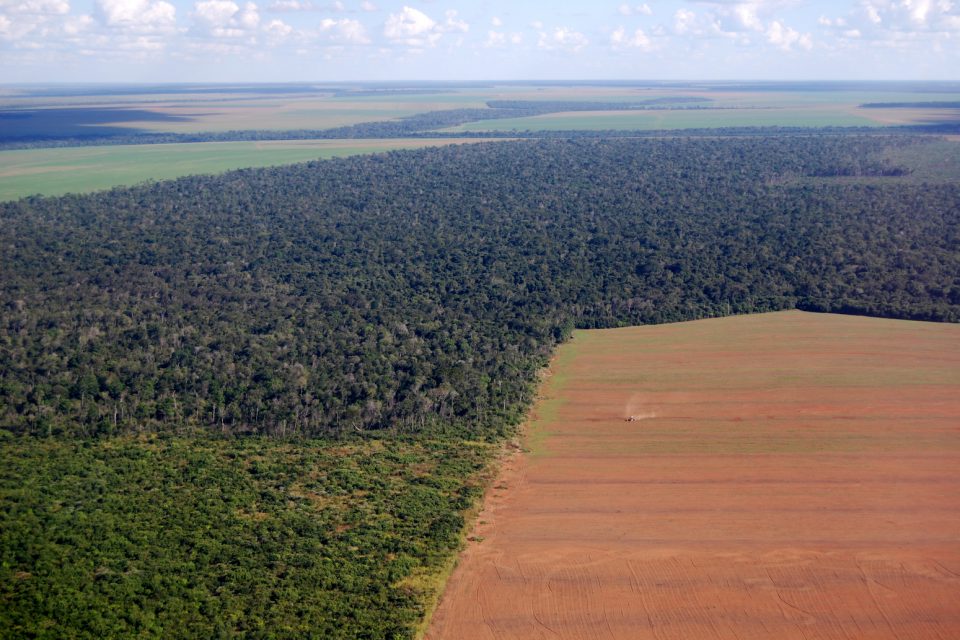 Trade war between the US and China may prompt Amazon deforestation

Soy is a staple ingredient in the diets of many vegetarians and vegans.  It seems there’s nothing you can’t do with soy, from simple edamame to the gelatinous wonder of tofu and milk replacements.  It is true that eating less animal products can reduce your carbon footprint, help lessen your culpability for deforestation, and de-incentivizes the slaughter of bison and wolves.  The unfortunate reality of all agriculture is that it requires a certain amount of land as well as potential inputs such as fertilizer and water.

As a human enterprise requiring resources, any type of agriculture has some environmental impact.  Soy is no different. Sometimes soy can even drive the deforestation of tropical rainforest. It’s also worth noting that soy is often used for livestock feed.

President Donald Trump has been open with his dissatisfaction with trade between the US and China, even before he took office.  Now, the US and China is locked into a mutual trade war. The BBC reports that so far, the US has imposed three rounds of tariffs over a wide variety of imports from China, mainly manufactured goods.  The tariffs range from 10 to 25% and total to more than $250 billion. China has responded to these broad tariffs by imposing its own targeted taxes on imports from the US, intending to specifically punish areas that voted largely for Trump.  One of the taxes is on imported soybeans from the US. The result has been a 50% decline in soy exports from the US to China in 2018.

China has been looking at other countries to supply more soy while relying less on US sources, decreasing taxes on imported soy from five Asian countries.  It’s also likely that Argentina and Brazil will be supplying more of China’s demand for soy. Unfortunately, an increase in soy from South America might also mean an increasing destruction of some of the most biodiverse and striking areas of the planet.

A paper published in Nature by Richard Fuchs and colleagues predicts massive deforestation in the Amazon region in response to a greater demand for soy from non-US sources.  According to Yale’s Global Forest Atlas, Brazil contains 350 million hectares of the Amazon rainforest.  110 million hectares of that land is designated as Indigenous Reserves, something that Brazil’s recently elected President Bolsonaro promised to do away with while campaigning.

Already, Bolsonaro has weakened indigenous land protections by transferring management of the reserves to the Department of Agriculture, a government agency friendly with agribusiness, Mongabay reported earlier this year.  An additional 25 million hectares of Brazil’s Amazon is set aside for sustainable use, mainly extraction of rubber.  70 million hectares are protected as parks in Brazil’s Amazon. How much these protections will mean under the rule of President Bolsonaro remains to be seen, and corruption under his predecessor already threatened protected lands. Former president Michel Temer allowed forest protected under the law to be cleared and turned into cattle pasture.  So far, ranching is responsible for the majority deforestation compared to other agriculture within Brazil’s Amazon basin but that may change.

With little standing in its way and demand growing, Brazil may be set to destroy greater areas of the Amazon to grow more soy.  As of 2016, Brazil supplied almost half of China’s demand for soy. The researchers estimate that the land used for soybean production in Brazil could increase by 39%, that’s 13 million hectares.  For comparison, the researchers pointed out that the worst two years for deforestation in Brazil, 1995 and 2004, cleared almost 3 million hectares of land.  This would be a historical destruction of one of the greatest forests on Earth.

To be clear, China’s demand for soy comes from a growing consumption of meat.  According to the paper in Nature, just a 2% decrease in soy used for livestock feed would result in 10 million tons less meat produced in China per year.  Globally, 71% of Brazil’s soy is used as animal feed. Influence from the west, whether it’s a more westernized diet or higher tariffs, is driving China’s demand and in turn destruction of Brazil’s Amazon.

But there is also some historic precedent for this. A 1980 US embargo on exporting soy to the Soviet Union drove up production of soy in Brazil.  Land used for soy in Brazil more than doubled between 1990 and 2010 to a total of 24.2 million hectares.  More land used for soy pushed cattle ranching deeper into the Amazon region, where slash and burn pasture practices use increasingly large portions of land in a wasteful practice.

In one scenario, all 94 countries that produce soy would help make up for China’s 22.6 million to 37.6 million ton shortage of soybeans.  In this scenario, Brazil would have to increase it’s land dedicated to soy production by 5.7 million hectares. It’s unclear whether this scenario is likely but it’s quite obvious that with current trends continuing, global consumption of meat – and thus soy – will continue to increase with growing populations. The question lingers – how long can we chew at our world before it’s gone?