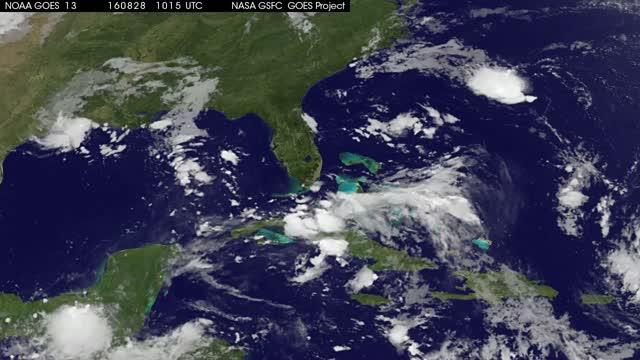 At 2:25 p.m. EDT (18:25 UTC) on Aug. 29, the Visible Infrared Imaging Radiometer Suite (VIIRS) instrument aboard NASA-NOAA’s Suomi NPP satellite captured a visible image of Tropical Depression Eight off the North Carolina coast. The depression had a tight concentration of strong thunderstorms around its low-level center of circulation.Tropical Depression 8 seen off the North Carolina coast

On Aug. 30 a Tropical Storm Warning is in effect for the coast of North Carolina from Cape Lookout to Oregon Inlet Pamlico Sound

At 8 a.m. EDT (1200 UTC) on Tuesday, Aug. 30 the center of Tropical Depression Eight was located near 34.1 degrees north latitude and 75.1 degrees west longitude. That puts the center of the depression just 85 miles (135 km) south-southeast of Cape Hatteras, North Carolina.

Maximum sustained winds are near 35 mph (55 kph) with higher gusts. Slow strengthening is forecast during the next 48 hours, and the depression could become a tropical storm later today.

NHC noted that the depression is expected to produce total rain accumulations of 1 to 3 inches with isolated maximum amounts of 5 inches over far eastern North Carolina, including the Outer Banks.