Two genes are responsible for the rapid diversification of warblers • Earth.com 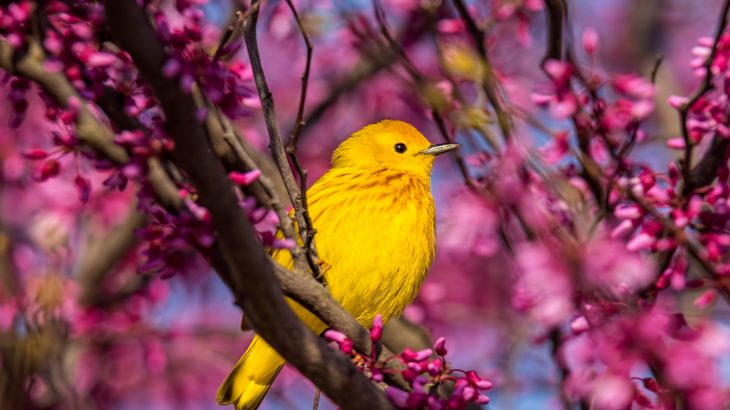 A new study from Penn State may help to explain how warblers rapidly diverged into so many unique species. The researchers discovered that two genes involved in warbler coloration have evolved through very different processes.

“Wood warblers are an incredibly colorful and diverse group of birds, with more than a hundred species in total,” said study first author Marcella Baiz. “These species arose very quickly in evolutionary time in what biologists call a species radiation. To better understand this radiation, we studied genetic regions related to plumage coloration within a particularly colorful subset of warblers.”

The experts sequenced the genomes of the 34 species that make up the Setophaga genus of wood warblers. They also created a phylogenetic tree to clarify how each species is related to one another.

The researchers narrowed the study to focus on nine closely related pairs of “sister species,” where each pair is the result of one species diverging into two. To gain a better understanding of the overall radiation, the experts at out to investigate whether similar evolutionary processes have shaped each of the pairs.

“In most cases it is difficult to get at the genes underlying the diversification process because it can be hard to link specific genes to specific traits, like colors,” said study lead author Professor David Toews.

“But many species of warblers readily interbreed, producing hybrid offspring with a mix of the parent species’ traits, so we were previously able to link certain color patterns with their underlying genetic regions. In this study, we focused on two coloration genes, but were able to study them across all the species in this large genus, to give us a window into the rest of the radiation.”

The Agouti-signaling protein (ASIP) is involved in producing brown and black plumage among the warblers. The team found genetic discrepancies near ASIP within the pairs of sister species that had differences in the amount or location of black or brown coloration.

“We created an evolutionary tree based solely on the ASIP gene region, which more clearly shows how the gene has changed across the genus,” said Baiz. “The patterns in this gene tree mirror patterns in the phylogenetic tree based on what we see across the whole genome.”

“This implies that the differences we see in ASIP resulted from mutations that arose independently in different species. However, the gene tree from the second gene, BCO2, showed a very different pattern that did not match up with the whole genome tree, which suggests different processes are at play.”

The second gene, beta-carotene oxygenate 2 (BCO2), is involved in producing bright yellow, red, and orange coloration. The researchers suggest that a process called introgression, which is the exchange of genes between species that have evolved separately, may explain why the pattern of genetic changes in BCO2 did not align with the overall radiation of the group.

“Introgression can occur when two separate species hybridize, and the hybrid offspring go on to mate with one of the original species,” said Baiz. “After several generations, genetic material from one species can be incorporated into the other. The signal of this kind of ancient introgression can be maintained in the genomes of living individuals – like how ancestry tests can reveal how many Neanderthal genes you have. In this instance, we unexpectedly found evidence for ancient introgression at BCO2 in two otherwise distantly related warblers in this genus.”

The findings suggest that both introgression and gene mutations that were passed from parent to offspring have helped to facilitate the extreme diversification of warblers. Going forward, the researchers hope to link specific mutations in these genes to changes in plumage coloration and they want to map the molecular pathways involved. The team also plans to expand their study to all 110 species of warblers.

“There’s a possibility that there may be introgression from another genus entirely,” said Professor Toews. “Expanding to other warblers would allow us to explore this possibility, and to more broadly understand the radiation of these fascinating birds.”