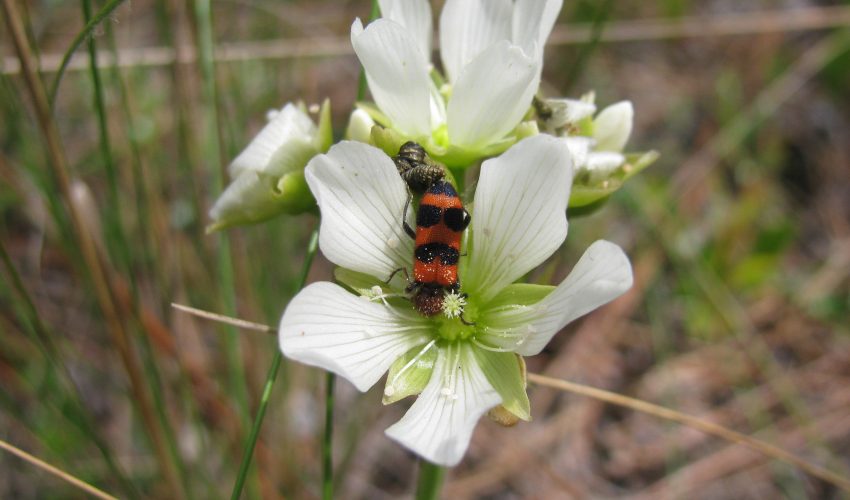 A study from North Carolina State University has revealed for the first time which insects pollinate Venus flytraps. The researchers are also reporting that these carnivorous plants do not eat the insects that pollinate them.

“Everybody’s heard of Venus flytraps, but nobody knew what pollinated them – so we decided to find out,” said study co-author Clyde Seorenson.

Venus flytraps, or Dionaea muscipula, are native to a small region within a 100-mile radius of Wilmington, North Carolina.

“These findings answer basic questions about the ecology of Venus flytraps, which is important for understanding how to preserve a plant that is native to such a small, threatened ecosystem,” said lead author Elsa Youngsteadt. “It also illustrates the fascinating suite of traits that help this plant interact with insects as both pollinators and prey.”

Over the 5 weeks of the plants’ flowering season, researchers captured insects found on the flowers of Venus flytraps at several sites. The experts identify each of the insects and checked to see how much pollen they were carrying from the Venus flytraps, if any.

Only a few of the insects were both frequently spotted on the flowers and carried a lot of pollen, including a checkered beetle, a green sweat bee, and the notch-tipped flower longhorn beetle.

Next, the research team identified prey from over 200 Venus flytraps. The experts discovered that the three pollinator species were never found in the traps, despite the fact that they were among the most common visitors.

“One potential reason for this is the architecture of the plants themselves,” said Youngsteadt. “Venus flytrap flowers are elevated on stems that stand fairly high above the snap traps of the plant, and we found that 87 percent of the flower-visiting individuals we captured – including all three of the most important species – could fly. But only 20 percent of the prey could fly. The pollinator species may simply be staying above the danger zone as they go from flower to flower, making them less likely to be eaten.”

Sorenson said that another possible explanation is that the traps, which are different colors than the flowers, may simply attract different species.

“We don’t yet know if they release different scents or other chemical signals that may also differentiate which portions of the plant are attractive to pollinators versus prey. That’s one of the questions we plan to address moving forward.”

The study is published in the journal American Naturalist.