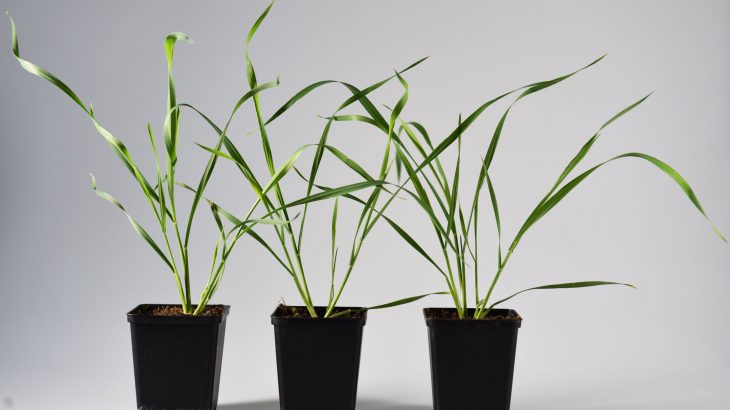 Wheat plants can switch chemical defenses to guard against pests

Plants have built-in defense systems that help them cope with the pests and insects that feed on their leaves, fruit, stems, roots, and saps. Studying the underlying mechanisms of plant defenses is important for understanding plant biology.

When a plant is threatened, it can produce substances called benzoxazinoids that help with resistance to larvae or indirectly guards against aphids.

Maize plants have a switch that determines whether the plant releases a more toxic form of benzoxazinoids to guard against caterpillars or whether it produces less toxic benzoxazinoids that help induce the production of carbohydrates called callose that block cell walls so aphids can’t feed on sap.

In a new study, researchers from the University of Bern in Switzerland and the Max Planck Institute set out to see if benzoxazinoids acted the same way in wheat as they do in maize.

The researchers were able to characterize the different functions of benzoxazinoids in wheat including the regulation of the toxic and less toxic forms of the substance.

The team identified that much like maize, a switch determined which defense method was used and found that the switch is an enzyme called methyltransferase enzyme.

Both maize and wheat contain the methyltransferase enzyme, but this enzyme evolved differently in the two cereal crops according to the results of the study.

“Our approach was to introduce the maize switch into wheat and to permanently activate it. Together with our colleagues from the Leibniz Institute of Plant Genetics and Crop Plant Research, we made transgenic wheat plants which were no longer able to choose between toxin production and defense regulation, but constantly produced the toxic form of the benzoxazinoids. This enabled us to elucidate the functions of benzoxazinoids in wheat in detail,” said Tobias Köllner, a member of the research team.

After analyzing the different forms of toxin production, the researchers found that maize and wheat likely evolved the ability to produce benzoxazinoids independently of each other, which is called convergent evolution.

“Convergent evolution is widespread in nature and results from the fact that different species evolve a solution for the same problem independently from each other,” said Matthias Erb. a co-author of the study. “It is remarkable that two grasses which produce the same specialized defensive substances evolved the corresponding switch for their use independently of each other.”