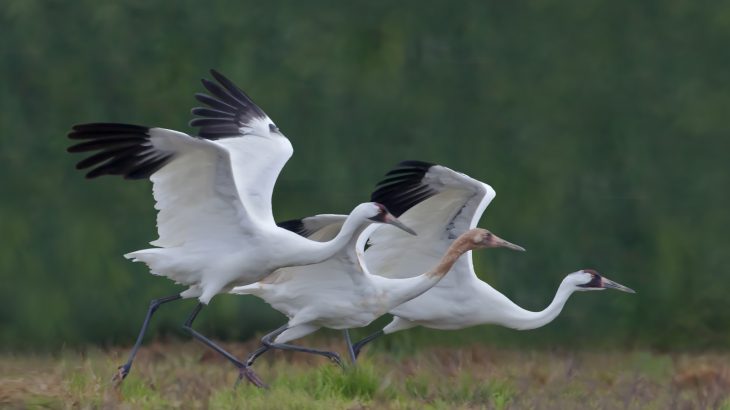 Aransas National Wildlife Refuge doesn’t have very much national name recognition but it’s important to the history of conservation in the US, especially for the iconic Whooping Crane (Grus americana).

The Whooping Crane itself is an impressive bird.  It’s estimated that 1,400 individual whooping cranes lived in 1860.  Hunting for sport as well as to supply the hat trade with feathers devastated the population.  In 1941, there was but one migrating flock of 15 individual whooping cranes left in the world. The last of the cranes were found wintering at what is now Aransas National Wildlife Refuge, a landscape of marsh- fresh water, brackish and marine located on the Gulf of Mexico in southern Texas.

Aransas National Wildlife Refuge, originally Aransas Migratory Waterfowl Refuge, was created on December 31, 1937, by Executive Order 7784 by President Franklin D. Roosevelt.  The original refuge, located on the Black Jack Peninsula of Texas (named after black jack oak), measured 47,261 acres, according to the Texas State Historical Association.  The refuge received its current name in 1939 and has grown to now include 115,670 acres of land, including islands.

Today, part of the Aransas National Wildlife Refuge is open for the public to visit for hiking, kayaking, wildlife viewing, fishing and hunting.  But part of the refuge is closed to the public, including important bird nesting areas where protection is vital.

The protected lands of Aransas National Wildlife Refuge and Wood Buffalo National Park are incredibly important in protecting whooping cranes, however it leaves a serious problem.  A single population of any animals is vulnerable. A disease, a storm, a freak accident could have easily wiped out an entire flock of 15 individual birds. Even larger single populations can be vulnerable.

To truly secure a long term future for whooping cranes, more than a single population is needed, as it isn’t wise to put all of your eggs in one basket when it comes to an entire species. According to the official management plan, before whooping cranes can be removed from the endangered species list, a major goal is to establish additional populations.  A minimum of 40 productive pairs in the original population plus 25 additional pairs in two different locations (populations) is called for by the management plan.

There are other contingency plans if this fails, but the bottom line is that the current population is much more secure with additional populations.  If other populations aren’t established, the plan calls for a self-sustaining population of 1000 individual cranes (250 productive pairs), a high goal to achieve for a population that was down to a mere 15 birds.

The goal of 250 productive pairs is based on genetics.  It’s estimated that a population in these numbers would then be gaining more genetic diversity than losing it, and there wouldn’t be significant inbreeding.  Even with a population this size, new migratory populations would help secure the species for the future.

The Aransas population of whooping cranes is doing well on it’s way towards the management goal.  The Cornell Lab of Ornithology reports on it’s All About Birds site that for the first time since the late 1800s there were more than 500 whooping cranes counted wintering at Aransas in 2018.  Despite concerns that the crane population would be hurt by Hurricane Harvey, this amounts to a 17% population increase from the year before.  Of the cranes in the population, the National Wildlife Federation reported that there were 98 crane nests found in Wood Buffalo National Park during the summer of 2017, which is a new record for nests recorded.

To assist with establishing additional migratory crane populations, Operation Migration is working with wildlife officials to establish new migratory route for captive bred birds that have never migrated before.  The basic idea is that a person in an ultralight aircraft actually leads the cranes on their migratory route. So far, the new migratory populations aren’t self sustaining, lacking the robust numbers of the Aransas population.

The total population of whooping cranes is around 600, with most of them in the Aransas population, the rest of the birds are split among three reintroduced populations in the US and a few birds in captivity.  As of March, 2019 of the eastern cranes, 13 are in Illinois, 36 are in Indiana, 9 are in Kentucky, 3 are in Tennessee, 14 are in Alabama, 3 are in Georgia, 5 are in Florida and 1 is in Louisiana. One female whooping crane has also been seen in Wheeler National Wildlife Refuge, where she is thought to be the last of a non-migratory population, according to the International Crane Foundation.  The long Wheeler bird may associate herself with the eastern migratory population but it’s uncertain.

So far, there’s some hope for the whooping cranes, and the fact that the bird is alive at all shows some resilience on the species part.  Unfortunately, despite advances, the crane has diminished federal support. The Patuxent Wildlife Research Center, a federal facility in Maryland that started with just 12 eggs in 1967 and grew to house more than 60 adult cranes, has officially ended their breeding program as of last October.

The end to the program comes from a Trump administration cut that eliminated the $1.5 million annual budget of whooping crane breeding.  The Baltimore Sun reports that despite decades of dedicated work to understand the complicated breeding and reproductive behaviors of the birds by government scientists, the program will be taken over by zoos.  The wildlife facility remains open with new research to focus on things like the West Nile virus and the impact of wind farms.

Concern is that the eastern migratory population, that summers in Florida and winters in Wisconsin could end because of the change in breeding programs.  Slight disturbances can stop the birds from successfully breeding and some worry that without support the eastern migratory population of whooping cranes will end.  It would be tragic if the majestic travels of a bird that stretches from prehistory until now would be cut short by a political maneuver. As Robert Porter Allen, a wildlife biologist said:

“For the Whooping crane there is no freedom but that of unbounded wilderness, no life except its own. Without meekness, without a sign of humility, it has refused to accept our idea of what the world should be like. If we succeed in preserving the wild remnant that still survives, it will be no credit to us; the glory will rest on this bird whose stubborn vigor has kept it alive in the face of increasing and seemingly hopeless odds.”