Wild horses caught in the crossfire of the western U.S. • Earth.com 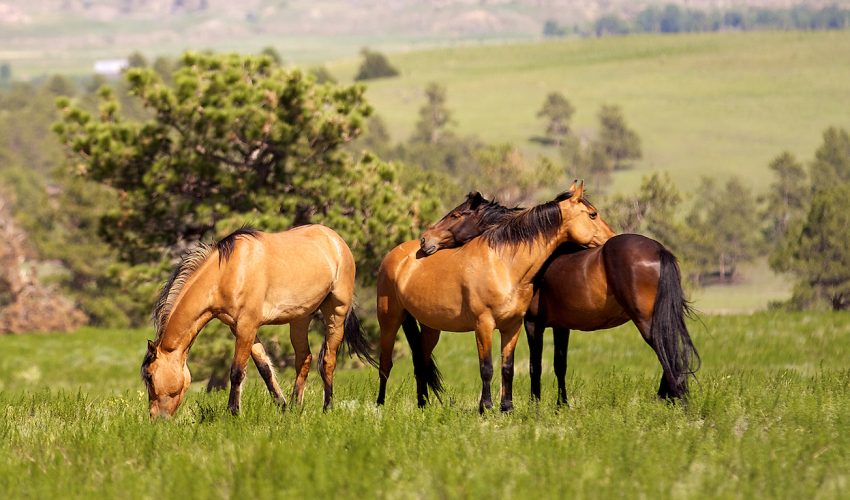 Wild horses caught in the crossfire of the western U.S.

According to a February 2017 National Geographic piece, there are more than 70,000 wild horses living in the western United States.  The Bureau of Land Management has a mandate that they’re clearly failing to keep the wild horse population at 23,622.

Horses evolved in North America, crossed land bridges into Asia and Europe, and then 10,000 to 12,000 years ago they went extinct in North America.  Wild horses were introduced to the American landscape from domestic animals from Europe. Mostly the Spanish lost or released horses. Sometimes someone died in a remote area leaving a horse, sometimes a person had more horses than could be handled and some were released.  Slowly, horses showed their knack at living, thriving and expanding their population in the inhospitable, arid American landscape they were dropped into in the 1500’s.

I’ve been on a hike in the Book Cliffs of western Colorado, a cliffy range of mesas named for their similarity of appearance to enormous stacks of books.  Indeed, the book cliffs lie open to the eyes of geologists, as one of the best places to study the sequence stratigraphy; that is layers of time laid down through erosion and deposition.

The Book Cliffs are a rare instance of a mountain range going east and west rather than north and south in North America.  At about two thousand feet the Book Cliffs make up the tallest continuous escarpment of cliffs/mountains in the world. The area is semi-arid with scraggly juniper, cactus, yucca and the occasional piñon pine providing scarce sustenance.  This is a great place to see wild horses.

On a short hike through decaying sedimentary cliffs and rough, scrabbly gravel and unsteady dirt, we heard a snort behind us.  Turning we saw a small group of horses moving quietly over the hill and grazing peacefully, keeping a wary eye on me and my girlfriend.  We watched the horses through binoculars; saw a small baby skittish and full of energy jumping around the flanks of adults watchful and strong.  I’ve seen wild horses before and since, mostly in the Book Cliffs, I’ve also seen wild burros in Northern Arizona in Grand Canyon-Parashant National Monument.  Seeing horses or burros in the American landscape, it’s hard to escape the feeling that they are part of the fabric of the place. In Twilight of the Mammoths, paleontologist Paul S. Martin confronts directly wild horses in the American landscape,

“The genus Equus remains highly variable, with many species in the Americas, until near time.  The explosive spread of free-ranging horses into grasslands of both North and South America following their reintroduction by the Spanish suggests a return of the native.”

Horses did evolve in North America; they are, or at least were, a part of the natural rangeland ecology of North America a mere eye blink ago in terms of geological history.  The problem has to do with numbers. An ever growing population of horses means that land is stripped of grass, bushes and other wild forage to be found. A large amount of wild horses perhaps means greater competition for resources like food and water with wild animals like pronghorns, mule deer, bison and bighorn sheep.  The problem is even more greatly exasperated by the presence of cattle and sheep on public lands, which outnumber wild horses. Something has to give and it seems unlikely that ranchers or wildlife advocates will give land to wild horses, so how to keep horses and burros from destroying the land?

Hunting is how wild animals, mainly deer, are kept at population limits set by government management agencies.  It’s a bit hard to convince hunters they want to eat horse sausage or mount a mustang head on their den wall. Hunting horses seems even less palatable to the general non-hunting population.  Horses are more companion animal in public opinion than they are a wild animal open to the cruel laws of predation. Hunting is of course how prey numbers are kept in check in a healthy natural ecosystem.  The Keystone Predator Hypothesis helps shed light on the whole issue of hunting as management tool and the utility of predation. Predators tend to focus on prey species that are easy to find and abundant. When a prey species abundance drops off, generally another prey species that competes with the first for food and other ‘resources’ becomes more abundant.  The predator tends to refocus predation on the new, now more abundant prey species. In this way, all prey species are pruned back, allowing several species that vie for the same resource to live in the same area. Predators in turn are kept at a certain population level due to the amount of prey species available.

Without predation or some other population control measure, disaster ensues.  The Kaibab deer population of Arizona is a classic example.

The Kaibab deer are a unique population of Mule Deer that the government wanted to protect.  In 1906, Theodore Roosevelt set aside the Grand Canyon Game Preserve, partly to protect Kaibab Deer.  In the early days of wildlife management, the federal government apparently made an egregious mistake.  All known predators of the deer in the area where killed mercilessly in an attempted eradication. Mountain lions and wolves were shot.  Hunting by humans was strictly regulated. The deer quickly grew in numbers without predators curtailing their numbers. As the deer population ballooned, grass, shrubs, even tree bark was consumed, soon the deer were emaciated, hungry and dying.  Disease increased in the overpopulated deer. The population of Kaibab Deer that had grown so expansively crashed even faster. Exact data on the deer are hard to find and other factors complicate the picture. Cattle and sheep were removed from the Kaibab Plateau at the same time predators were eradicated.  What we do know is that the population of Kaibab Deer did increase to a much larger number than before and subsequently crashed. Whether it was due to the foolishness of predator control or natural cycles, the starvation, illness and crash in deer population was clearly linked to an unsustainable deer population growth.

The danger we face with wild horses is the same danger that we faced with the Kaibab Deer. The fear is the horse population will continue to grow unchecked, leaving the western United States barren of natural vegetation, severely damaged and littered with the bloated, rotting corpses of horses.  Of course it’s not just the fate of horses and burros that’s at stake, the problem also affects the deer, bison and other wild animals. The problem of wild horses also affects ranchers dependent on the federal subsidy of public land for their living.

The BLM has a limited budget and there has been an effort to control wild horse and burro numbers.  Wild horses and burros are regularly put up for adoption and this is one of the least controversial measures for population control.  The problem is that according to a nationalgeographic.com article, as of March 1 2016, there were 45,000 horses and burros in governmental holding pens, theoretically waiting to be adopted.  Adoption rates fall far short of population growth of horses and burros.

According to an article in Science, the population increase of horses and burros means that by 2030, the government will have to spend $1.1 billion to feed and water the animals in holding pens.  A new horse birth control in the form of a yearly injection in mares has also been attempted. The BLM has injected 4,562 mares since 2005 according to theweek.com but there has yet to be an appreciable decline in horse populations.  Euthanasia for un-adopted wild horses and burros is so unpopular that Ben Masters received death threats for voting for it. Ben Masters himself was also an advocate for adopting horses, personally adopting several.

There are no USDA approved processing plants for horse meat in the US, the most likely solution being that any hunted or otherwise killed horses to be used for human or animal food would be sent to Mexico for processing.

It’s hard to deny that with a larger presence of mountain lions, wolves, black and brown bears throughout their traditional range in the west, populations of horses would be different.  All of these animals are capable of killing at least sick, young or injured horses and together possibly maintaining a healthy horse population. As anyone familiar with the ecological history of the west knows, these predators were hit hard by extermination efforts bolstered by the federal and state governments and largely haven’t recovered.

The decline of predators in the American west is inexorably linked with the ascendance of cattle and sheep.  Eradicating predators was always popular with American cattlemen who found wild predators a threat to their livestock.  According to the BLM, they manage livestock grazing on 155 million acres of their land. The Forest Service also manages some land for grazing, including so called wilderness areas but I couldn’t find solid numbers on how much land they allow for grazing.  An analysis by the Center for Biological Diversity carried out in 2015 showed that grazing on public lands costs US taxpayers $1 Billion over the last ten years. Wolves, mountain lions and other predators are still contentious in the few places they survive in the west and part of the problem is political pressure from ranchers subsidized on public land.

Horses are just one more aspect complicating the western landscape and caught in the crossfire of a fight over who controls the land and the heart of the west.  Horses like other immigrants have carved out a place in the United States but unlike some have a longer history, one only broken briefly. With a wilder west, a west without millions of public cows and more predators, we might be able to find a place for horses.  We might even be able to find a place for wild horses that didn’t involve mass slaughter.