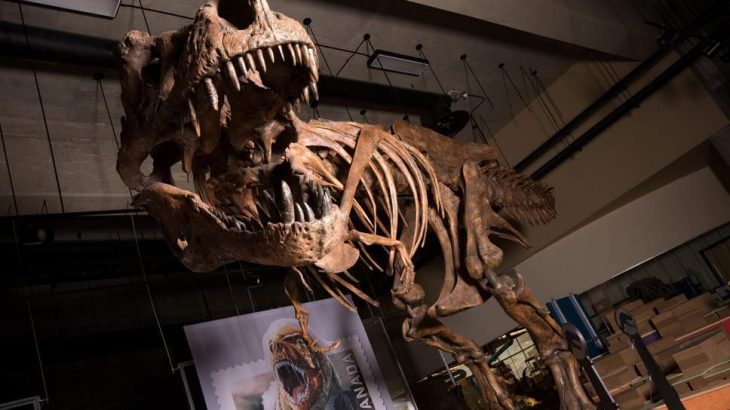 Sue, one of the largest and most well-preserved Tyrannosaurus rex skeletons in the world, has been knocked down a peg when it comes to world’s biggest T. rex.

Paleontologists from the University of Alberta have reported that a Tyrannosaurus rex skeleton, first discovered in 1991 in Saskatchewan, Canada, is the largest ever found.

Measuring a massive 42 feet (13 meters) in length and likely weighing more than 19,000 pounds when it was alive (8,800 kilograms), the skeleton, nicknamed Scotty, is not only a couple hundred kilograms heavier than Sue, but its size and weight make it larger than all other carnivorous dinosaurs.

“This is the rex of rexes,” said Scott Persons, the lead author of the research. “There is considerable size variability among Tyrannosaurus. Some individuals were lankier than others, and some were more robust. Scotty exemplifies the robust. Take careful measurements of its legs, hips, and even shoulder, and Scotty comes out a bit heftier than other T. rex specimens.”

Scotty roamed prehistoric Canada 66 million years ago, and when its skeleton was first discovered, the bones were encased in hard sandstone and paleontologists have only now fully assembled the one-of-a-kind specimen.

“It wasn’t until now we’ve been able to take a step back and look at the specimen as a whole,” Persons told New Scientist. “And doing so there’s an oh gosh moment, because the specimen really is enormous.”

Part of the reason Scotty, so named after a celebratory bottle of scotch that was used to toast the find, is so massive is because the dinosaur was as old as T-Rex’s can get.

“Scotty is the oldest T. rex known,” said Persons explains. “By which I mean, it would have had the most candles on its last birthday cake. You can get an idea of how old a dinosaur is by cutting into its bones and studying its growth patterns. Scotty is all old growth.”

The T. Rex grew fast and didn’t have a particularly long lifespan. Scotty is estimated to have died at around 30 years old. This means that Scotty had a lot of time to add muscle and mass after reaching full maturity.

“By Tyrannosaurus standards, it had an unusually long life. And it was a violent one,” Persons said. “Riddled across the skeleton are pathologies–spots where scarred bone records large injuries.”

Scotty will soon be on display at the Royal Saskatchewan Museum in May of this year.

“I think there will always be bigger discoveries to be made,” said Persons. “But as of right now, this particular Tyrannosaurus is the largest terrestrial predator known to science.”