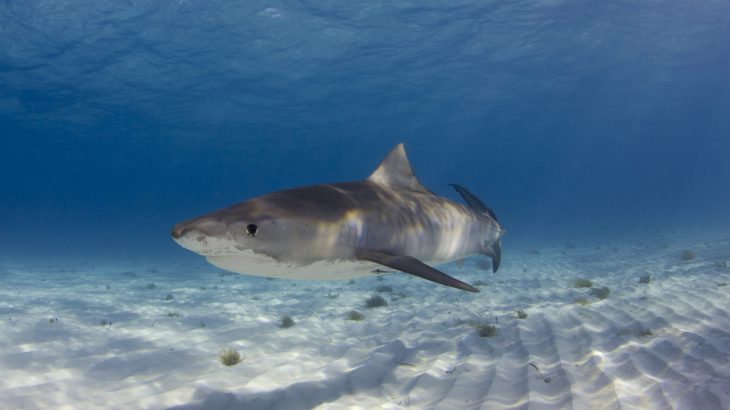 Known affectionately as the “garbage cans of the sea,” tiger sharks are known for eating almost anything they come across — from sea turtles to rubber tires. A new paper in Ecology has found yet another bizarre addition to the tiger shark menu: songbirds.

It’s not weird for a shark to eat birds in general, as many seabirds meet their demise at the hands (or teeth) of sharks every day. But the weird part about this new finding is that the birds found to be consumed by young tiger sharks are more commonly found in your backyard than in the ocean, such as sparrows, doves, and woodpeckers.

The research team – led by Marcus Drymon of Mississippi State University – wrestled three-foot-long juvenile tiger sharks onto a boat, pumped their stomachs, and then analyzed a sample of their stomach contents before releasing the sharks back into the wild. Out of the 105 sharks studied, a whopping 41 had bird remains in their stomachs. These remains were sent to the Field Museum’s Pritzker Laboratory for Molecular Systematics and Evolution for DNA analysis.

Through this DNA analysis, scientists were able to determine that none of the bird remains found belonged to any kind of marine bird. All of the species analyzed were terrestrial birds. This is the first evidence of tiger sharks eating birds that primarily live on land.

All of the sharks caught and analyzed were in the Gulf of Mexico during bird migration season.

“In every instance, the timing of the tiger shark eating the bird coincided with the peak sighting for that species of bird off our coast,” explains Drymon.

“The tiger sharks scavenge on songbirds that have trouble flying over the ocean. During migration, they’re already worn out, and then they get tired or fall into the ocean during a storm,” adds Chicago’s Field Museum researcher Kevin Feldheim, a co-author on the study.

These findings could help provide scientists with a better understanding of tiger sharks, which may help us protect them in the long run.

“All sharks are in trouble,” says Feldheim. “We don’t know the extent of how industrialized fishing has taken a toll, but the vast majority of top predator populations have declined in recent years.”