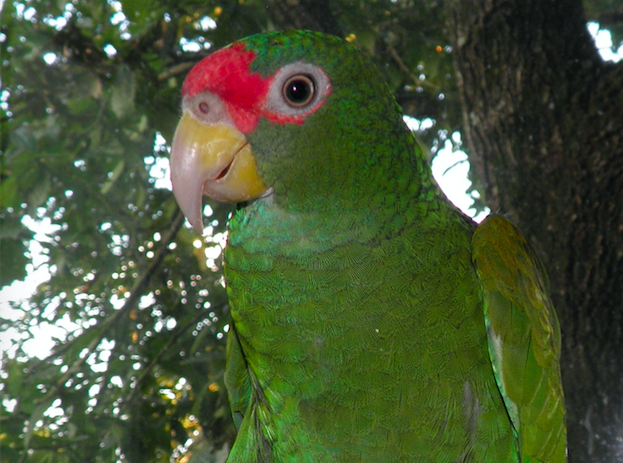 In 2014, Ornithologist Miguel A. Gomez Garza was visiting a secluded part of the Yucatan Peninsula when he noticed parrots with color patterns that stood out as unique. The bird expert’s discovery has led to the validation of a new parrot species, the Blue-winged Amazon.

A genetic evaluation revealed that the species evolved from A. albifrons, or the White-fronted parrot, around 120,000 years ago. At this time, the Blue-winged Amazon parrots had developed features that distinguished them from their ancestors.

The most distinctive feature of the Blue-winged Amazon is it loud, repetitive call. The duration of syllables used for its vocalization is significantly longer than those of other Amazon parrot species.  Sharp sounds made by the birds are more similar to the call of Accipiters than to those of other parrots.

While the new species is named for its blue covert feathers, an exclusive green crown truly sets it apart from other Amazon parrots. Blue-winged Amazon parrots live in small flocks that typically consist of 12 or less individuals. Mates and their offspring usually stick together, and have unique family features.

The Blue-winged Amazon lives in the same area of the Yucatan Peninsula as the White-fronted Amazon and the Yucatan Amazon, but it does not crossbreed with them. All members of the genus Amazona are herbivores that eat seeds, fruit, flowers, and leaves.

The description of the newly-named Amazona gomezgarzai is published today in the open-access journal PeerJ. The classification of the Blue-winged Amazon as a new species is based on its shape, color pattern, call, and behavior. The study highlights the similarities and differences of these features compared to other Amazon parrot species.