Plants are able to make their own food through a process known as photosynthesis. Photosynthesis in plants generally involves the green pigment chlorophyll and generates oxygen as a byproduct.

But how exactly do plants accomplish this?

An international team of scientists is getting closer to the answer thanks to unprecedented, atomic-scale images of a protein complex found in plants, algae, and cyanobacteria captured by ultrafast X-ray lasers.

The experiments, led by the Department of Energy’s Lawrence Berkeley National Laboratory (Berkeley Lab), are helping researchers narrow down the process by which the protein, called photosystem II, uses light energy to split water and create oxygen. Nearly all the oxygen in the atmosphere is produced in this system. Just as importantly, this reaction also yields protons and electrons that are used to reduce carbon dioxide to carbohydrates later in the photosynthesis cycle.

Photosystem II is found in the thylakoid, a compartment in chloroplasts and cyanobacteria surrounded by a membrane. The thylakoid is where the light-dependent reactions in photosynthesis occur, yet the exact nature of those reactions have, paradoxically, been in the dark for scientists.

“There have been cryo-images taken when the protein was in a dark or resting state,” said study principal investigator Junko Yano, senior scientist at Berkeley Lab’s Molecular Biophysics and Integrated Bioimaging Division. “But the stages of photosystem II do not proceed at freezing temperatures. What we have been able to do for the first time using X-ray lasers is study this process at room temperature so we can tell what is actually happening in nature.”

“We have been trying for decades to understand how plants split water into oxygen, protons, and electrons,” said Yachandra. “Understanding how nature accomplishes this difficult reaction so easily is important for developing a cost-effective method for solar-based water-splitting, which is essential for artificial photosynthesis and renewable energy.”

They were especially interested in the protein’s small metal catalyst, an oxygen-evolving complex in which oxygen atoms bridge four manganese atoms with one calcium atom. How this catalyst stores the energy from photons and oxidizes two water molecules has been a key question in photosynthesis.

“To our surprise, we found that the two leading theories explaining the mechanisms for how the reaction proceeds are probably not correct,” said Yachandra. “If the theories were correct, we would have seen water binding to specific sites and other predicted features in the protein. This means that something else is going on, so now we’re homing in on the right answer by process of elimination.”

The ability to peek into the process of splitting water at room temperature has been hindered by the fact that most imaging or crystallography technology using X-ray lasers blasts the samples to bits before meaningful data can be collected. Recent advances made possible by the LCLS changed that.

“The beauty of the LCLS is that the laser pulses are so short–only 40 femtoseconds in duration, but very intense–that you can collect the data before the sample is destroyed,” said Kern. “It’s very new, and there are only two places in the world where that can be done at present.”

A femtosecond is one quadrillionth of a second. To get a sense of the scale, it can be compared to what one second would be in a span of about 30 million years.

“The spatial resolution of the structure we’re reporting is 2.25 angstroms,” said Kern. “We’re trying to see the process at extremely tiny length scales, and this is the first time we’re getting a spatial resolution that even approaches that. We’re only beginning to understand the story.”

At LCLS, the researchers first illuminated their crystal samples with green photons to trigger the photosynthetic reactions in photosystem II. They then shot the X-ray pulses at the crystals, yielding diffraction data that was quickly collected before the crystal was destroyed. The researchers used ammonia as a marker to help determine the location of water molecules throughout the structure. If ammonia was present at a binding site, then the researchers knew that water was not there.

Putting the pieces together

Software algorithms developed by Sauter, Paul Adams (also of the Molecular Biophysics and Integrated Bioimaging Division at Berkeley Lab), and their respective groups were then used to translate the diffraction readings into the 3-D rendering of photosystem II.

Since each crystal sample can only survive one shot of the X-ray laser before being blasted to smithereens, the researchers had to grow hundreds of thousands of them to obtain enough data to cover the intermediate stages in the reaction.

“At LCLS, you only get a tiny sliver of data at a time, so you have to piece them all together,” said Sauter in describing the role of the software used to create the images. “It’s like taking a puzzle, dumping all the pieces on the floor, and then putting them back together.” 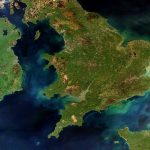