Today’s Video of the Day from the European Space Agency features the Malaspina Glacier, which is the largest piedmont glacier in the world. Piedmont glaciers are those that are positioned at the foot, or base, of a mountain.

Malaspina Glacier is located west of Yakutat Bay in southeast Alaska. It spans an area of around 2,900 square kilometers and flows for around 80 kilometers along the southern base of Mount St. Elias, according to ESA.

“Malaspina flows faster than the piedmont glaciers in Antarctica and Greenland. Piedmont glaciers flow from a steeply sided valley, where the ice is constrained by mountains, onto a flat plain. The change in environment from narrow to wide creates the piedmont’s signature rounded lobe.”

“This Sentinel-2 image shows the central lobe of the glacier surging towards the sea. This image has been processed using the near-infrared channel to highlight vegetation in bright red. The wavy lines around the lower half of the glacier are rock, soil and other debris that have been deposited by the glacier – called moraines.” 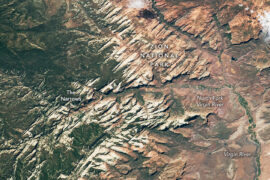