Thirty years ago, NASA declared war on an elusive global killer: air pollution. In early 2016 it took them to East Asia.

Air pollution is a silent killer. According to the UN air pollution causes around 152,000 deaths a year across the Americas, and more than 2 million deaths in the Western Pacific. Some parts of the world monitor air quality using ground sensor networks and forecast models, but not everyone has access to those tools.

Space research could hold the keys to the solution. If spacecraft orbiting Earth thousands of miles high had instruments to track pollutants, they could help scientists make informed decisions about air pollution. Researchers believe they could better unravel the complex ebb and flow and mixing of pollutants from different sources. With this data, a solid scientific foundation could be built to encourage smart strategies for cutting air pollution.

NASA and other spacefarers want this bright future, but the job isn’t as easy as it sounds.

In the 1970s, NASA took baby steps towards probing the composition of Earth’s atmosphere. The environmental challenge that drove the agency was the thinning of Earth’s protective ozone layer in the stratosphere – but detecting it proved difficult due to very involved data collection.

This investment has finally paid off – with new space-based measurements, scientists can now see the first signs of ozone layer healing. But probing air pollution at the bottom of the atmosphere, where people live and breathe, was a tougher challenge.

Beginning in the 1990s, NASA began producing global air quality data from their new space sensors. They launched their Earth Observing System fleet of satellites and could document regional trends in carbon monoxide, nitrogen dioxide, sulfur dioxide and particulates. Pollution plumes from cities and forest fires could also be seen moving downwind for hundreds of miles.

NASA scientists continued to make these space measurements as reliable as possible, sponsoring global networks of ground sensors and elaborate airborne field experiments to verify the new satellite data. Since the early 2000s, NASA has partnered with air quality professionals to put this satellite data to work protecting public health.

NASA is now adding a trio of science and technology projects to its data sets; the first starts next week in the skies over South Korea. A joint field study by NASA and the Republic of Korea will spend six weeks collecting data from three aircraft, ground sites, ships and satellites to advance the ability to monitor air pollution more accurately from space.

The Korean Peninsula offers a robust natural laboratory with a mix of sources, including the megacity of Seoul, pollution blown across borders, seasonal fires, and desert dust.

Findings from this Korea U.S. Air Quality (KORUS-AQ) study will play a key role in the development of a new international observing system.

The international constellation of three separate sensors is slated to be in operation by 2022.

Just last month, NASA greenlit a new space mission which will help us understand how airborne particles are harming people in major cities around the world. Known as  the MAIA sensor (Multi-Angle Imager for Aerosols), it will analyze air quality.

Scientists can combine the new information with public health records to make suggestions regarding particulate pollution and specific health impacts. NASA is contributing its expertise in hopes for long-term improvement of public health around the world. 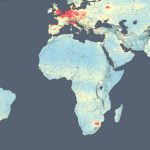