The Frisian Islands in the North Sea • Earth.com

The Frisian Islands in the North Sea

According to ESA, the Frisian Islands stretch from the northwest of the Netherlands through Germany to the west of Denmark.

The image is focused on the North Frisian Islands, which are located in the northernmost part of the German region of Frisia and are split between Germany and Denmark.  The islands shield the mudflat region of the Wadden Sea (large parts of which fall dry during low tide) from the North Sea . The Frisian Islands, along with the mainland coast in the German Bight, form the region of Frisia (German and Dutch: Friesland ), homeland of the Frisian people.

The four main islands that make up the archipelago are Sylt, Föhr, Amrum, and Pellworm. Sylt, the largest of the islands, is known for having one of the longest unbroken stretches of sandy beach in Europe. Also the history behind the sea is that their migrations eventually led them to settle the shores of the North Sea, where their territories were bordered and guarded by the Rhine-Meuse-Scheldt Delta on one side and the River Ems on the other. They also settled the numerous small coastal islands offshore, which gave them a degree of isolation and security. 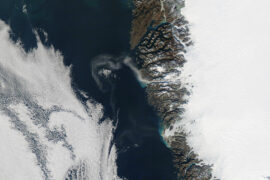 Large dust plumes stream off the coast of Greenland

The site of the world's largest cuttlefish aggregation
POPULAR NEWS