The recently launched Sentinel-3A satellite takes us over the United Kingdom, in this false-color image acquired on 9 May.

Made up of England, Scotland, Wales and Northern Ireland, the UK is an island nation in northwestern Europe.

At the top center of the image, we can see aircraft contrails – water vapor condenses around the small particles in the aircraft exhaust to form ice crystals.

The result is the formation of an elongated cloud-like condensation trail in the sky, unmistakable in the center of the image.

At top right, some snow cover in southern Norway is still evident. At bottom right, part of the Netherlands with the unmistakable 700 sq km Lake Markermeer is clearly visible.

In the southern North Sea/English Channel, an algal bloom is distinguishable in shades of light blue and green. Meanwhile, closer to the coast we can see brown sediments where rivers and streams run into the sea.

The Scottish Highlands at the tip of the United Kingdom appear light brown, representing bare soil and rock formations, with some vegetation. The rest of the island, as well as the visible part of Ireland, are very green, representing dense vegetation.

Sentinel-3A’s Ocean and Land Colour Instrument is a new eye on Earth, monitoring ocean ecosystems, supporting crop management and agriculture, and providing estimates of atmospheric aerosol and clouds – all of which will bring significant benefits to society through more informed decision-making. 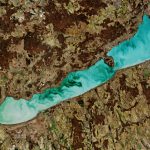 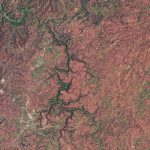