The GPM core observatory satellite flew over tropical cyclone Kyant on Oct. 25 at 12:06 p.m. EDT. Kyant was a small tropical cyclone, but GPM found it contained some very intense storms. A violent area was shown by GPM’s Dual-Frequency Precipitation Radar (DPR) to be dropping rain at a rate of over 8.5 inches per hour.

At NASA’s Goddard Space Flight Center in Greenbelt, Maryland, data was used to make a 3-D examination of storm top heights. These measurements indicated that some thunderstorms within the tropical cyclone had unusually high storm tops. A few storm tops were found to reach heights above 12.4 miles.

As Kyant traversed the Bay of Bengal in a southwesterly direction, it weakened.

By Oct. 27 at 5 a.m. EDT, Kyant had weakened to a remnant low-pressure area. The remnants were centered near 15.9 degrees north latitude and 84.2 degrees east longitude. That’s about 120 nautical miles south-southeast of Visakhapatnam, India.

The Joint Typhoon Warning Center (JTWC) reported that the imagery showed the strongest thunderstorms associated with the remnants were over the western quadrant of the storm.

Forecasters at JTWC said the global computer models are in good agreement that the system will track to the west-southwest over the next few days, with little to no development expected. Maximum sustained surface winds are estimated at 23 to about 29 mph and the potential for development of a significant tropical cyclone within the next 24 hours is low. 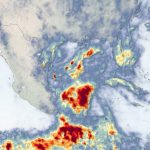