The ESA reports that there are currently more than 129 million objects larger than a millimeter orbiting around Earth. This space debris includes objects ranging from tiny flakes of paint to rocket boosters and satellites.

Beyond confirming that it is possible to remove space debris, the top priority of the mission is to remove the largest objects from the most populated orbits.  These objects have a greater risk of collision, and could potentially create a cloud of smaller debris.

There are more than 6,000 satellites currently orbiting Earth, more than half of which are no longer in use.

Many of the satellites that are still active are used for GPS, weather updates, or internet connectivity. There would be a great impact on society if these satellites are damaged or destroyed.  Also to derelict human-built objects left in orbit, there are so many examples of space debris include fragments from their disintegration, erosion and collisions, or even paint flecks, solidified liquids that have come off  from spacecraft, and unburned particles from solid rocket motors. Space debris represents a risk to spacecraft. 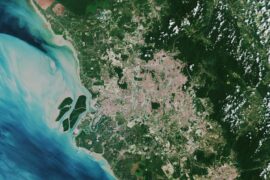