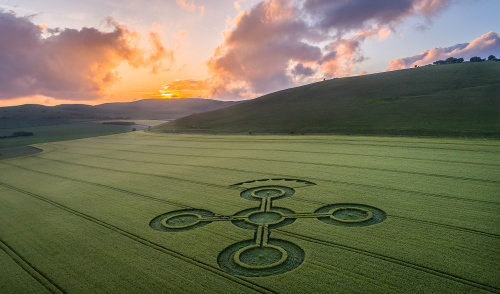 Crop circles are incredible pieces of art. While some think that aliens are the cause of these jaw-dropping displays, there is plenty of evidence to the contrary. The popularity of crop circles has declined somewhat in the last few decades, but they are still exciting features on the agricultural landscape.

This much is certain; crop circles are not made up. These stunning patterns exist in the world, whatever their cause. They exist in countries around the world and thousands have been documented in the last 40 years. Colin Andrews coined the term ‘crop circle’ in the late 1970s.

Taken literally, there are probably millions of circles of crops in the world. These are caused by center-pivot irrigation. This type of irrigation has a water source in the middle of a circle. This water is fed through metal tubing, which sprinkles a crop with water as it proceeds in a circle. Center pivot irrigation works like the hour hand on a clock. While center pivot irrigation can indeed make for some intriguing patterns upon the landscape, those patterns aren’t the type of crop circles covered here.

The Shapes of Crop Circles Are Geometric

The most basic crop circles are simply circles of bent over crop in a field. While crop circles may have been basic in design back in the 70s and 80s, they are anything but simple these days.

Modern crop circle designs generally use Euclidian geometry. Euclidian geometry focuses on the relationships between basic shapes, such as circles and triangles. The interplay between cones, squares, circles, and other basic geometric shapes makes beautiful, often symmetric designs. These designs often have some mathematical elegance embedded. Fractals, or repeating, mathematical patterns that use ratios, are often used in crop circles as well.

Crop Circles Can Be Massive

The first observed “saucer nests” were only couple dozen feet across. However, modern crop circles may span many hundreds of feet. Crops, typically grown in flat, homogenous areas, are great, blank canvases for massive artwork. In 2010, someone made a monstrous jellyfish that spanned about 600 feet long!

Crop Circles Can Be Wildly Intricate

A famous 2002 crop circle depicted a stereotypical alien head holding a disc. This disc contained encrypted information that a computer scientist decoded. The information on the disc spelled the words “beware the bearers of false gifts and their broken promises,” along with some other phrases.

Other crop circles often have repeating, symmetrical patterns that use the different colors between the bent-over crops and the standing crops to make visually stunning displays.

How Are Crop Circles Made?

Now for the contentious bit you’ve been waiting for. While everyone agrees that crop circles exist, that they can be massive, and that they are intricate and beautiful, some people disagree on exactly how the crop circles were made. Are aliens responsible? Or perhaps freak weather events?

Crop circles began to appear with greater frequency in the late 1970s. Famously, Dave Chorley and Doug Bower, admitted to creating many crop circles in southwest England in the ’70s and ’80s. They focused on the areas around the towns of Hampshire and Wiltshire. These pranksters blanketed England with over 200 different designs. Their artwork inspired plenty of other folks to try their hand at creating crop circles around England, and eventually around the world.

The method Chorley and Bower used to create crop circles was low-tech. It involved a rope, a wood plank, and some clever minds. Using the rope from a center point, crop circler makers can use the piece of wood to flatten down selected areas of crops.

Crop circle makers enter the crops from the ‘spurs’ in the field, which are lines of flattened crops from the farmer’s tractor. That way, the makers don’t leave a suspicious trail behind them when they leave.

Similarly, the 2012 Olympics in London used crop circles of the Olympic rings to advertise the summer sports event.

Perhaps Unusual Weather is to Blame

Freak weather events may cause some crop circles, but certainly not crop circles of the intricate variety. Back before the complicated crop circles of today, meteorologist Terrace Meaden thought cyclonic winds, a natural phenomenon, may have briefly touched down on fields. These whirlwinds, like a mini-cyclone or tornado, bent over the grain in one direction, making the saucer-nest pattern. This theory is not favored in light of the development of complex crop circles. Overall, this theory is highly questionable.

Some People Argue Aliens Are Involved

Some people aren’t convinced that humans are the cause of every crop circle. While they agree that some crop circles were made by Chorley, Bower, and other artists, they believe some crop circles are too perfect for human creation. Intelligent life from beyond Earth, they say, is responsible.

A common conspiracy theory is that aliens create crop circles. People who believe this are often called ‘croppies.’ Those who study the extraterrestrial world of crop circles are called ‘cereologists’ (cereal being the grain that crop circles are usually made from).

To be fair, croppies would likely suggest that human crop circle makers are the actual hoaxers who distract from the true alien messages hidden in genuine crop circles. However, given the current state of crop circle research, it seems fairly clear that aliens’ involvement in crop circles is fake.

The belief in aliens’ involvement with crop circles originates from modest 20th-century crop circles, which were merely circular areas of flattened down crops. These areas, early hoaxers thought, were the landing pads of spaceships. ‘Traditional’ UFOs looked like flying saucers. If these UFOs were to land on a crop, they would make the ‘saucer nest’ that were characteristic of these early, simple circles.

What Evidence Do Croppies Have?

Advocates suggest many theories. Some think that crop circles are alien doodles that bleed through from the other side of our ‘flat earth‘.  Others think that crop circles are encrypted messages from aliens. These aliens, they say, don’t approach us more directly because we would be too afraid. Aliens are slowly getting humans used to the idea of extraterrestrial life visiting Earth through making beautiful patterns on crop fields, they say.

One piece of evidence these believers use is that crop circles appear exclusively overnight. For incredibly complex pieces, like the jellyfish or various other projects, it is difficult to imagine how a small group of people could make such an impeccable piece of art in just one night. Additionally, crop circles aren’t seen incomplete. They are always whole and perfect. This perfection, some argue, is evidence that aliens must be the cause.

Some folks say they have flown over a particular farm, only to fly back over it a few minutes later to see a perfectly constructed crop circle that wasn’t there upon the first pass. The design materialized out of nowhere! Others say that they have seen mysterious lights floating off from the areas of crop circles. First-hand experience of UFO sightings has convinced some croppies that aliens are the true makers.

The Geometry is Too Perfect For Humans to Make

Drawing something on paper or on a computer is one thing. Making complex images on the ground with little bearing and few tools is another. Advocates for alien crop circles believe the perfection of crop circles is proof that some of these depictions are made by aliens. How could mere humans with a piece of wood and rope make such amazing pieces of art?

The Crops are Bent, Not Broken

Additionally, the crops themselves are not destroyed in the process of making a crop circle. This seems too delicate for humans to have done, believers say.

However, crop circles typically appear when crops are still green and supple. This means that plants can be put under a great amount of strain before actually breaking. Given the toughness of grasses, it shouldn’t be too surprising the crops aren’t broken.

The bent grain is typically bent in either a clockwise or a counterclockwise direction. Sometimes, the design will alternate between the two directions to make a particular visual effect. If someone was using a plank to flatten down particular sections of grass while using a rope connected to the center of the circle, they would certainly proceed in either a clockwise or counterclockwise direction.

Ley lines are powerful lines that connect distant places on Earth. It is believed these ley lines lay on top of powerful earth energy currents. Some crop circle researchers believe that the lines in crop circles line up perfectly with ley lines. They also think that circles that appear hundreds of miles apart from each other may be on the exact same ley lines.

Where Are Crop Circles Most Common?

Interestingly, the epicenter of crop circles is in southern England, near Stonehenge and Avebury. These two archaeological landmarks feature massive stones constructed in similar, Euclidian geometry. Avebury was constructed about 4200 years ago and Stonehenge is thought to be 4000-5000 years old. Perhaps these ancient structures in the United Kingdom inspired people to make similar, landscape-style art.

Crop circle enthusiasts travel to crop circles to see the site for themselves. Some of these enthusiasts are croppies, but many simply enjoy the beauty of the circles. Sadly, the Wiltshire Crop Circle Study Group seems to be defunct as of 2014. Unlike other hoaxes, there doesn’t seem to be a cohesive society around crop circles.

Crop circles appear around Europe, infrequently in the U.S., and sometimes in Australia and elsewhere around the world.

What Crops Are Favored?

What crop is favored depends when in crop circle season the circle appears. Crop circle season generally runs from May to October, coinciding with the summer agricultural season. Whatever grain happens to be in season is the favorite crop for crop circle makers.

These crops are wheat, oats, corn, and barley. Occasionally, circles will appear in non-grass crops, such as rapeseed or potato.

If you visit southwestern England in the height of summer, you can probably walk around a genuine crop circle. Perhaps you should visit one and decide for yourself whether it was made by human or alien. Maybe you will feel the energy from the ley lines or see something peculiar about the bent stems of the crop.