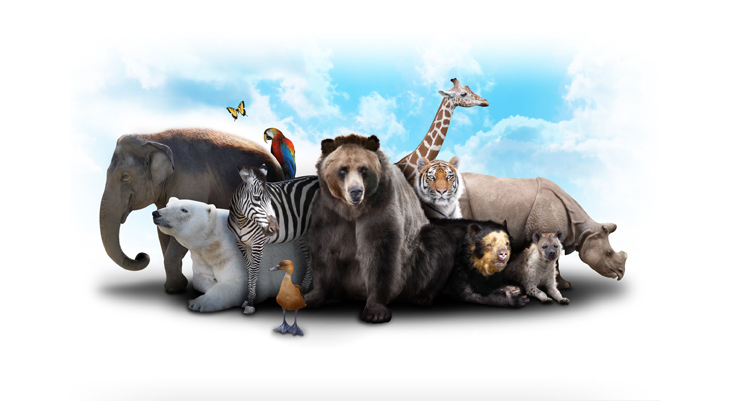 According to the International Union for Conservation of Nature (IUCN), the number of endangered species has more than doubled over the past 20 years. The biggest threat to species and biodiversity worldwide is habitat loss, which is the primary reason that 85 percent of the species on the IUCN Red List landed there in the first place.

However, it would be much more accurate to say that human activities are responsible for putting plants and animals at risk of extinction, considering that these activities are the driving force behind habitat loss, fragmentation, and degradation. In fact, the Center for Biological Diversity reports that 99 percent of currently threatened species are at risk due to the influence of human activities.

Scientists warn that we are already in the middle of the Earth’s sixth mass extinction. The ongoing event, which is referred to as the Holocene or the Anthropocene Extinction, is a direct result of human activities and man-made climate change. The last event of this magnitude was responsible for wiping out the dinosaurs.

Humans are causing irreparable damage to habitats by actions such as clearing forests, building roads and dams, and by releasing harmful greenhouse gas emissions that are rapidly transforming the climate.

Species are also under intense pressure from overhunting and overharvesting. When animal populations are reduced, there are fewer breeding pairs and less genetic variation among the groups. Genetic variation is critical to the health of a population, allowing animals to adapt more easily to changes in the environment.

As many animal and plant populations are declining, the human population is exploding. This increases the demand for the development of housing, industry, and agriculture. As humans spread out, the habitats of native organisms are affected both directly and indirectly. The growing demand for freshwater, for example, is having an enormous impact on ecosystems.

The World Resources Institute explained,  “Freshwater ecosystems – the diverse communities found in lakes, rivers, and wetlands – may be the most endangered of all. Some 34 percent of fish species, mostly from fresh water, are threatened with extinction, according to the latest tally of the World Conservation Union (IUCN), which tracks threats to the world’s biodiversity.”

“Freshwater ecosystems have lost a greater proportion of their species and habitat than ecosystems on land or in the oceans; in addition, they are probably in greater danger of further losses from dams, pollution, overfishing, and other threats. In extent, freshwater ecosystems are quite limited, covering only about 1 percent of the Earth’s surface. Yet, they are highly diverse and contain a disproportionately large number of the world’s species.”

As many as 28,000 species are expected to become extinct over the next 25 years due to deforestation alone. According to the United Nations Food and Agriculture Organization (FAO), 18 million acres of forest are lost each year and about half of the world’s tropical forests have already been cleared. National Geographic reports that the world’s rainforests could completely vanish in the next 100 years.

Forests are often cleared for urbanization, agriculture, harvesting of wood and timber, and palm oil production. Our planet’s trees store an estimated 300 billion tons of carbon dioxide (CO2), which is released into the atmosphere when forests are cut down. This is a major contributor to climate change and one of its most dangerous counterparts, global warming.

Marine species are particularly vulnerable to temperature stress, and ocean acidification from rising CO2 levels is making matters even worse. Pollution is also on the growing list of threats to aquatic life, and there are currently hundreds of marine species listed by the IUCN as threatened or endangered.

Over the course of three years, a comprehensive analysis was conducted by 600 volunteer scientists using data from thousands of published studies. The results of the research were presented at a meeting of the Intergovernmental Science-Policy Platform on Biodiversity and Ecosystem Services (IPBES).

The reports, which represent the most up-to-date view of the health of our planet’s species, have been created to inform policy decisions in the future.

For the last 100 years, an average of two species of vertebrate have gone extinct every year. In addition, around 25 percent of mammals and 41 percent of amphibians are currently threatened with extinction, and the list is growing.

The study also revealed that there are an estimated 8.7 million plant and animal species on Earth, but around 86 percent of land species and 91 percent of marine species are not yet known. Many of them will vanish before they are ever identified.

Experts at the Center for Biological Diversity report that we are losing Earth’s species at 1,000 to 10,000 times the pre-human rate, with dozens vanishing every day.

“The science is clear: biodiversity is in crisis globally,” said World Wildlife Fund (WWF) Director General Marco Lambertini. “We depend on biodiversity for the food we eat, the water we drink, the clean air we breathe, the stability of weather patterns, and yet our actions are pushing nature’s ability to sustain us to the brink.”

The authors of a study published in the Proceedings of the National Academy of Sciences (PNAS) reported: “In the last few decades, habitat loss, overexploitation, invasive organisms, pollution, toxification, and more recently climate disruption, as well as the interactions among these factors, have led to the catastrophic declines in both the numbers and sizes of populations of both common and rare vertebrate species.”

The researchers investigated the population losses of over 27,000 vertebrate species and the extinction of 177 mammal species between 1900 and 2015. The study confirmed the theory that we are experiencing Earth’s sixth mass extinction event. The experts also determined that this event is more severe than what has been previously estimated.

“Our data indicate that beyond global species extinctions Earth is experiencing a huge episode of population declines and extirpations, which will have negative cascading consequences on ecosystem functioning and services vital to sustaining civilization,” the researchers wrote. “We describe this as a ‘biological annihilation’ to highlight the current magnitude of Earth’s ongoing sixth major extinction event.”

“The massive loss of populations is already damaging the services ecosystems provide to civilization. When considering this frightening assault on the foundations of human civilization, one must never forget that Earth’s capacity to support life, including human life, has been shaped by life itself.”

“When public mention is made of the extinction crisis, it usually focuses on a few animal species (hundreds out of millions) known to have gone extinct, and projecting many more extinctions in the future. But a glance at our maps presents a much more realistic picture: they suggest that as much as 50% of the number of animal individuals that once shared Earth with us are already gone, as are billions of populations.”

The scientists warn that there is very little time left to take effective action – only two or three decades. However, they say, the situation is expected to become even worse in the coming decades rather than improving.

Study co-author Paul Ehrlich of Stanford University told The Guardian: “The serious warning in our paper needs to be heeded because civilization depends utterly on the plants, animals, and microorganisms of Earth that supply it with essential ecosystem services ranging from crop pollination and protection to supplying food from the sea and maintaining a livable climate.”

Professor David Bravo-Nogues from the Center for Macroecology, Evolution and Climate at the University of Copenhagen led a study to investigate the relationship between climate change and biodiversity.

“We compiled an enormous amount of studies of events, which we know influenced biodiversity during the past million years,” said Professor Bravo-Nogues. “It turns out species have been able to survive new conditions in their habitat by changing either their behavior or body shape. However, the current magnitude and unseen speed of change in nature may push species beyond their ability to adapt.”

Fortunately, there are many agencies dedicated to conserving Earth’s ecosystems. The World Wildlife Fund (WWF) has grown into one of the world’s largest conservation organizations with the support of over five million people and active projects in more than 100 countries.

The WWF released this statement about its mission:

“We seek to save a planet, a world of life. Reconciling the needs of human beings and the needs of others that share the Earth, we seek to practice conservation that is humane in the broadest sense. We seek to instill in people everywhere a discriminating, yet unabashed, reverence for nature and to balance that reverence with a profound belief in human possibilities. From the smallest community to the largest multinational organization, we seek to inspire others who can advance the cause of conservation.”

“We seek to be the voice for those creatures who have no voice. We speak for their future. We seek to apply the wealth of our talents, knowledge, and passion to making the world wealthier in life, in spirit, and in living wonder of nature.”