What is Erbium? • Earth.com 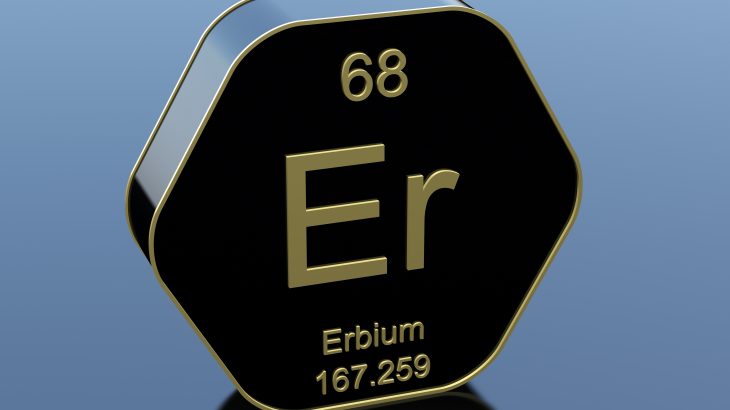 is a chemical element with the symbol Er and atomic number 68. Erbium is a rare, silvery-white metallic lanthanide (an element having an atomic number between 57 and 71). It is found solid in its natural state and is commonly found with several other elements in the mineral gadolinite. It is found in Ytterby, Sweden. Erbium was discovered by Carl Gustaf Mosander in 1843. Mosander separated yttria from gadolinite into three compounds he called erbia, terbia, and yttria. Erbia and terbia, however, were confused at that time. After 1860, terbia was renamed erbia, then after 1877 what was known as erbia, was renamed terbia. Erbium-oxide was isolated in 1905, and pure Er metal wasn’t produced until 1934. It wasn’t until the 1990s that Er-oxide would be cheap enough to be used as a colorant in art glass.

Erbium is never found as a free Earth element in nature. It is found bound to monazite sand ores. It was historically difficult to separate rare earth metals from one another until the invention of ion exchange techniques in the 1950s. This made it also cheaper to produce pure metals and their compounds. The principal sources of Er come from the minerals xenotime, euxenite, and gadolinite. It has also been found recently in the clays of southern China. Two-thirds of the ore produced in China, though, is yttrium. Only about 5% is erbia. The total concentration of Er found in the Earth’s crust is less than one ounce per ton of earth
Erbium in its pure state is pliable (easily shaped).

Erbium is used in several applications. It is commonly used as a photographic filter, and a metallurgical additive. It is used in nuclear technology as a nuclear poison. Er is commonly used in its erbia state as a colorant for glass, cubic zirconia, and porcelain. It is also used in sunglasses and cheap jewelry.
Er compounds have little to moderate toxicity, although their toxicity has yet to be investigated in detail. The dust form of metallic erbium presents a fire and explosion hazard.