What is Foghorn? • Earth.com 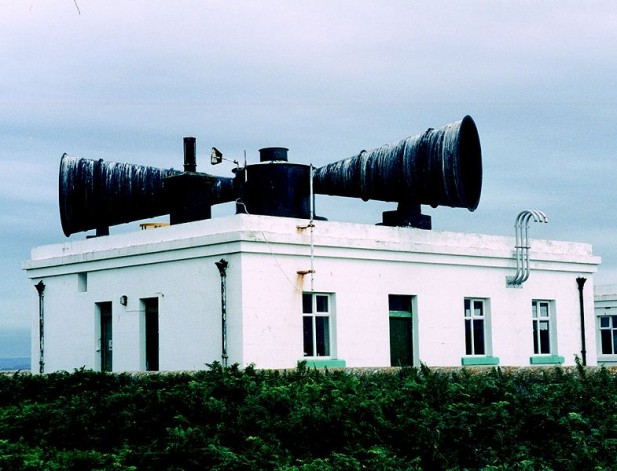 Most often used in foggy conditions, is a device that uses sound to warn vehicles of hazards. Generally marine transport is using the term. When lighthouses are obscured the foghorn provides an audible warning of any dangers to ships. They have been used for hundreds of years with some of the initial ones being simple bells or gongs that were manually struck. Some lighthouses shot off cannons periodically in order to warn ships. Whistles were also used in the early days.

Since most of these options were manual there were significant efforts throughout the 19th century to automate the process. Eventually clockwork systems were developed for striking bells. James William Newton claims to have been the inventor of the fog signaling technique using loud and low notes.

Robert Foulis created the first automated steam-powered foghorn. After hearing his daughter play piano in the fog, he realized the lower notes were more audible. So he designed a device to produce a low frequency sound. His fog signal was installed on Partridge Island in 1859; however, Foulis was in legal battles over his invention for the rest of his life. Celadon Leeds Daboll created a coal-powered foghorn that few lighthouses are using.

Foghorns use a vibrating column of air to create a tone although note all vibrations are resulting from the same method. Some use vibrating plates or metal reeds similar to a car horn. Others are similar to a siren where the air is entering through holes in revolving cylinder or disk. Semi-automatic foghorns work using a clockwork mechanism that opens the valve admitting air to the horns. Stevens Automatic Bell Striker was one of the first automated fog bells.

John Tyndall and Lord Rayleigh developed a large trumpet design that achieved maximum sound propagation. The automation of lighthouses caused the removal of many foghorns in order to avoid the need to run the complex machinery and replaced it with compressed air horns and electrically-powered diaphragm.

Through the use of laser beams the automated process works by detecting ships out at sea and if the beam reflects back the foghorn activates. Foghorns have also been used on railway lines in order to warn of dangers on the line.