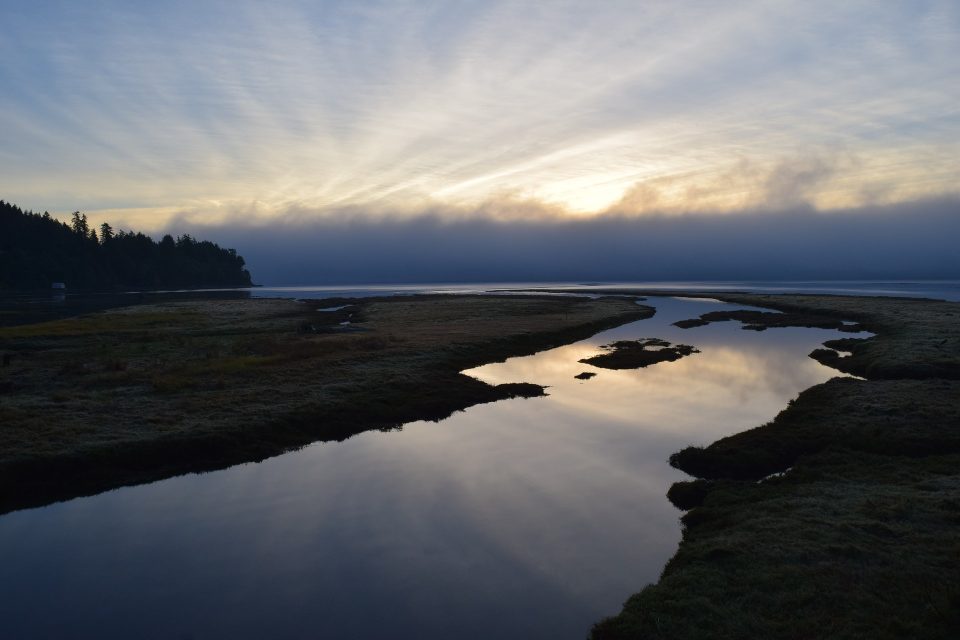 An estuary describes a partially enclosed area where freshwater from rivers or streams mixes with the saltwater of the ocean. Estuaries can also be called bays, lagoons, and sounds, and it includes salt marshes, salt flats, wetlands, and much of the river delta. Because of the unique chemistry of the water and the influence of two vastly different biomes, estuaries are one of the most productive ecosystems in the world, harboring some astonishing diversity of animal life. Like much underwater fauna, some of these animals may be familiar while others seem pretty alien. With that, we’ll take a dive into some of the world’s estuaries and the incredible lives of the creatures that call them home.

Just a river or marine ecosystem alone is quite multifaceted. When you combine the two, a whole new world erupts. Before we explore a few of the more interesting estuarine animals, we’ll go over some of the key concepts to estuarine life.

At the root of the incredible estuarine ecosystems lies salinity and water movement. How much salt? How little salt? Where is the salt? All these queries are further influenced by the physical nature of the estuary. Saltwater has a much higher density than freshwater, so in general, the water on the surface will be fresher. Additionally, areas closer to the ocean will naturally have higher salinity than the areas closer to the freshwater input. Even the depth of the estuary plays a role. Shallower estuaries have more evenly mixed salinity levels as the tidal range has a greater impact compared to deeper bodies of water which retain more stratified layers of salt and freshwater.

In general, the salinity levels of an estuary are nearly always in flux and greatly varied. Circulating water changes as the tides flow in and out, creating currents that are either colder and saltier (with the high tide) or warmer and fresher (with low tide). Similarly, precipitation will influence the river flow, adding more or less freshwater to the estuary depending on the season. This variability of conditions translates to the huge diversity of plant and animal life found in estuarine habitats. 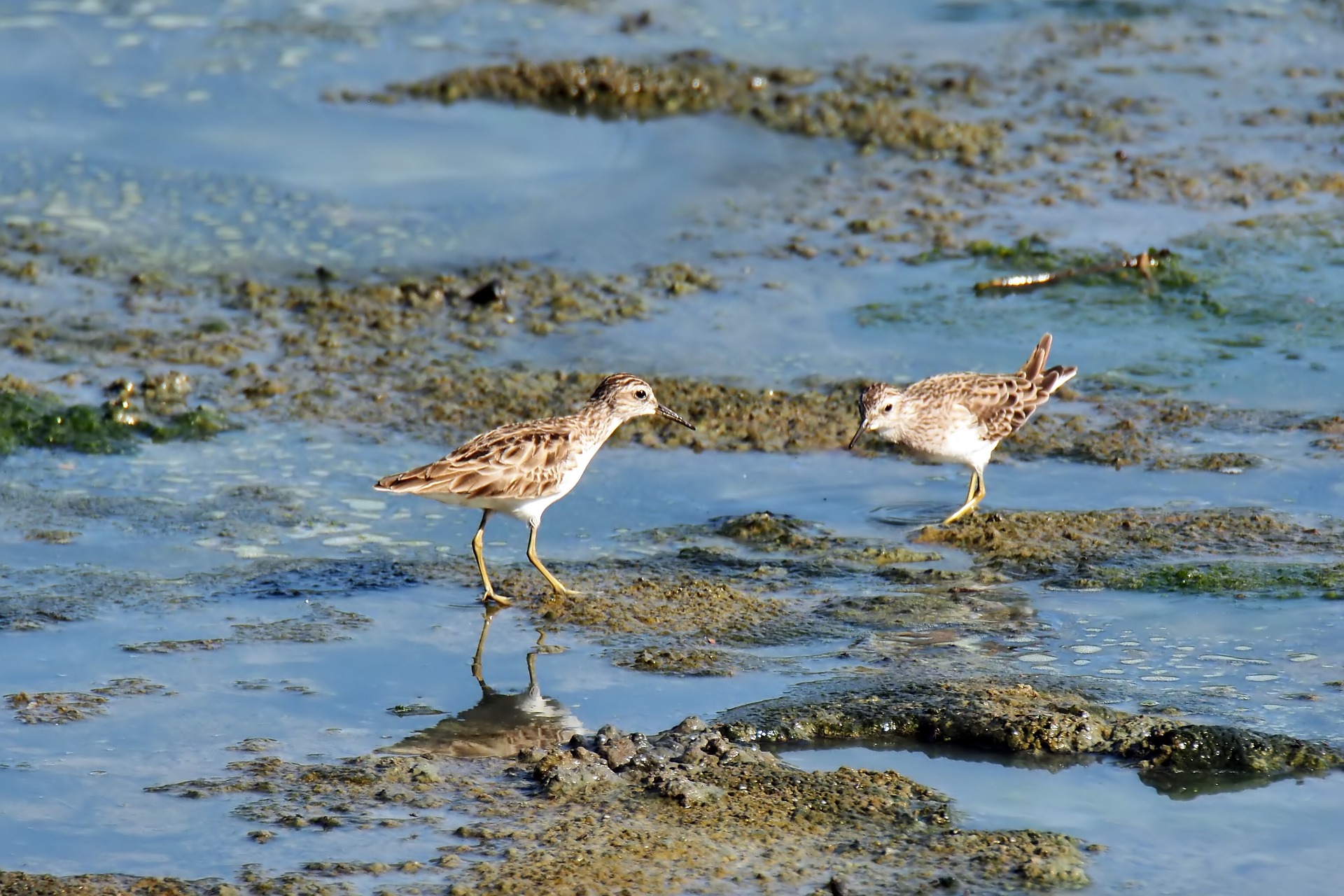 Estuaries are important habitat for migratory birds, like sandpipers. Image by Vinson Tan from Pixabay.

Another way estuaries change is through sedimentation. A combination of river-borne sediments, shore erosion, and tidal movement, this process can drastically change the nature of an estuary. The sediment builds up from the mouth and sides of an estuary and slowly moves the river delta out to sea. However, the mix of depositions forms a nutrient-rich substrate that supports all the bottom-dwelling organisms.

Depending on a coastline’s geology, estuaries can form in a few different ways. Based on their origins, all of these ecosystems fall into one of four different estuary types, each providing a distinct set of ecosystem services and ecological charm.

Also called “drowned rivers,” coastal plain estuaries form when a rise in sea level causes saltwater to flood an existing river valley. For example, the Chesapeake Bay formed at the end of the last ice age about 10,000 years ago. Glacial melt caused rising sea levels that rushed into the deep canyon carved by the Susquehanna River, leaving behind a brackish merge of river and ocean in an embayment.

When a continental and oceanic plate meet at a convergent boundary, one plate slips underneath the other, causing a depression in the earth’s surface and, in many cases, a tectonic estuary. The seawater floods into this newly formed bowl, mixing with the existing watershed. The San Francisco Bay is the largest estuary on North America’s west coast. As the Pacific Plate slowly slips under the North American Plate, the four small bays that collectively make up the San Franciso Bay formed, along with plentiful salt marshes, lagoons, and river delta habitats.

A bar-built estuary forms when sand bars or barrier islands create bays and lagoons that are fed by rivers and tides. The barriers protect the delicate estuarine ecosystems from the harsh battering from the ocean. Though since they are created by currents and made of sand, they often experience shifts in shape, size, and salinity. The Outer Banks, a series of narrow barrier islands in North Carolina and Virginia, create sandy, bar-built estuaries.

Fjord estuaries form when glaciers carve out long, narrow incisions in the landscape to connect with the ocean. When the glaciers retreat, the seawater floods the deep valley. In most cases, the inflow point for the ocean is quite narrow while the input of freshwater is more abundant. Combined with the depth of the formation, fjords have intense stratification of the water column with the freshwater sitting on top. Puget Sound in Washington state includes a series of fjord estuaries. 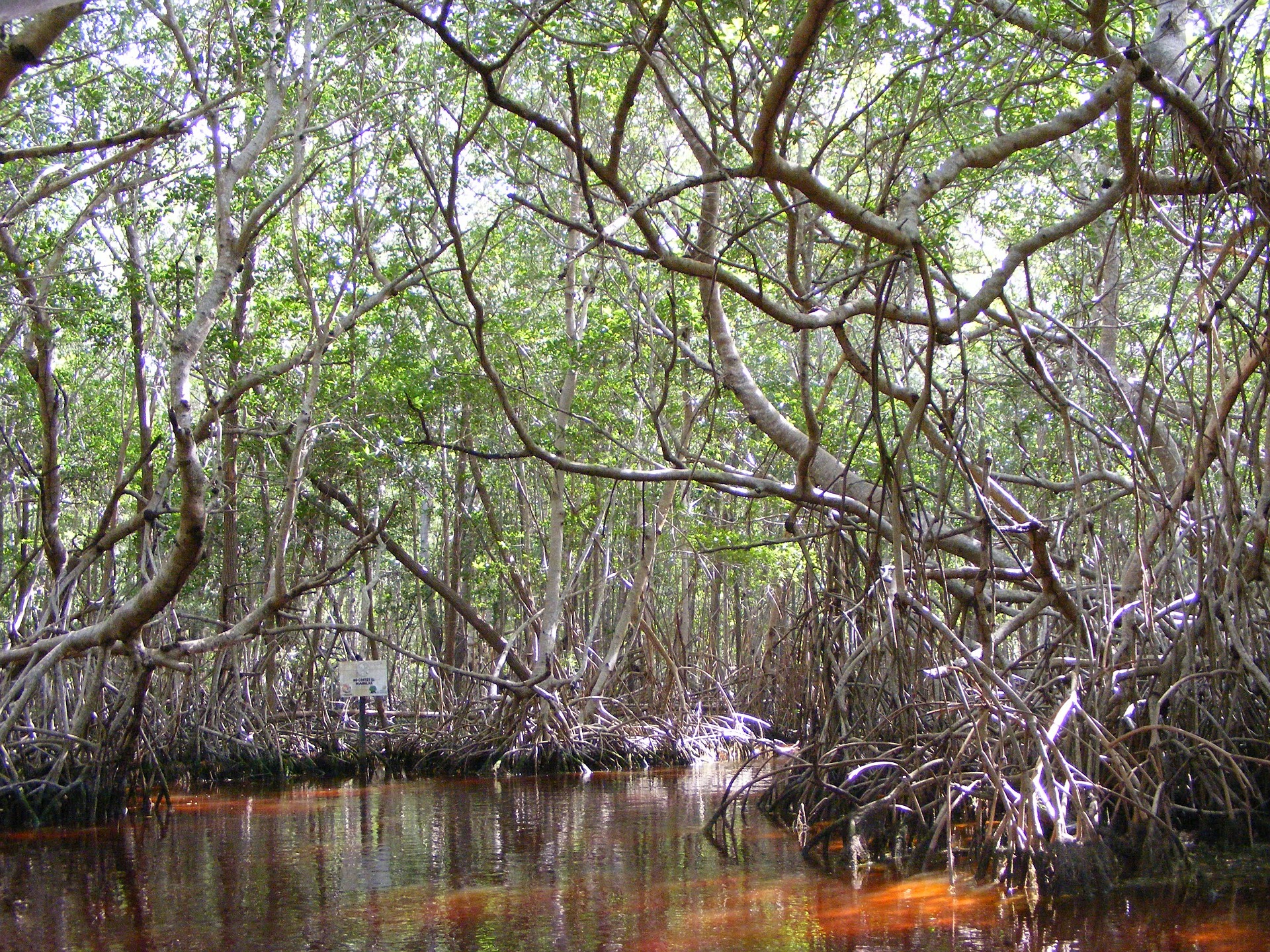 Mangrove forests provide critical nursery grounds for many species of fish. Image by organizatuempresa from Pixabay.

As we’ve pointed out, the diversity of conditions in an estuary lends itself to a diversity of habitats. But that variety of abiotic factors isn’t the only feature that makes estuaries such interesting biomes. Calm waters provide a safe haven for all sorts of critters: fish, migrating birds, and a large community of aquatic invertebrates call estuaries home. With plentiful plankton and bacteria, even the microscopic world is popping! The plethora of natural resources

Don’t be scared off by the scientific names! The genus Callinectes includes some very recognizable animals, namely, the cartoon legend Mr. Krabs himself. Called blue crabs, these species have broad, flat carapace, oar-like rear legs to help with swimming, and spines on the sides of their backs. The classic estuarine animals, blue crabs use all parts of the estuary in their life cycles. While they mate upstream in an estuary, the females head seaward to release their eggs in saltier conditions.

Famous in the Chesapeake Bay, the blue crab has both a fascinating ecology and an important cultural significance. Blue crab populations are extremely important to the eastern United States, and the states of New Jersey and Maryland in particular. 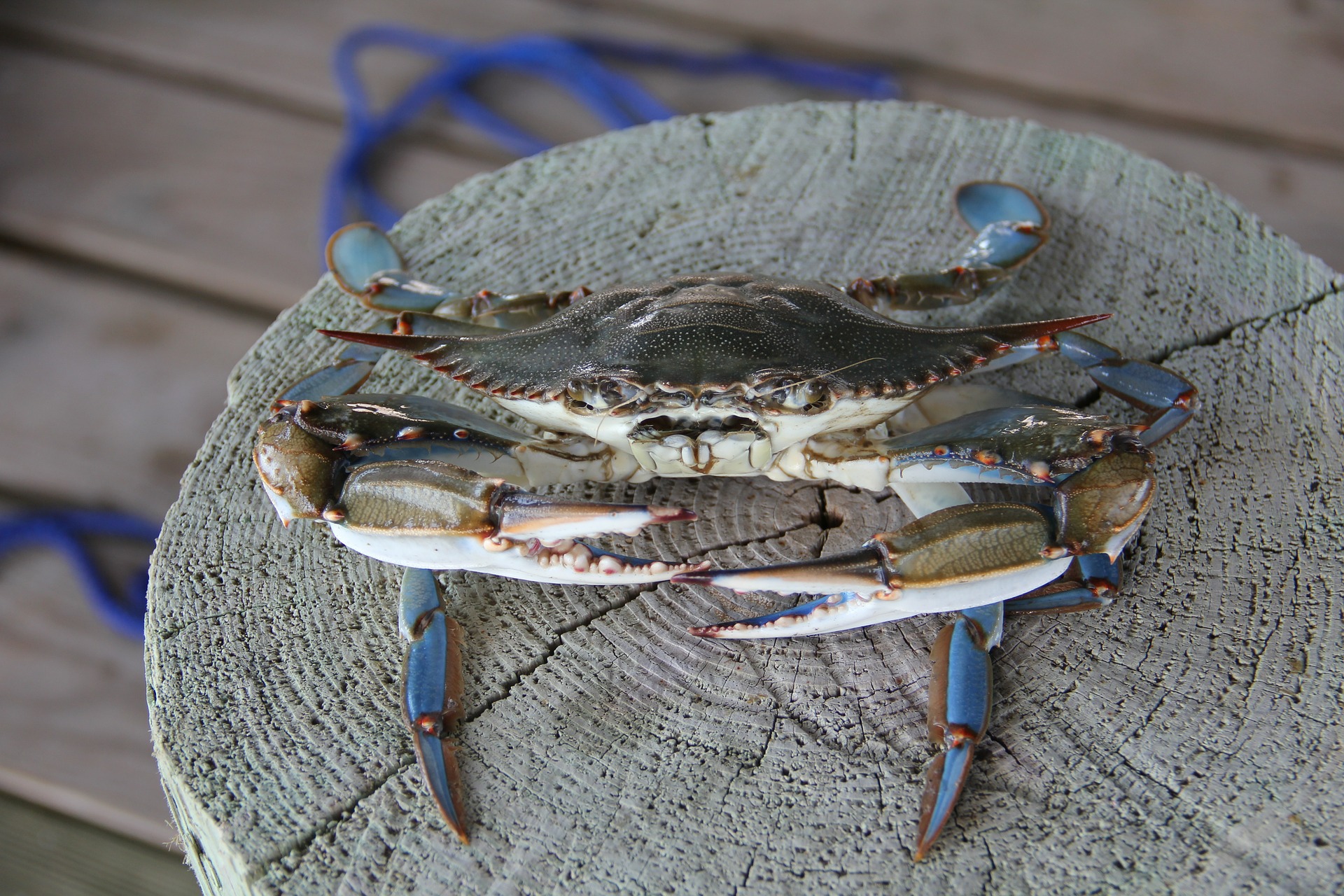 A truly fascinating group of critters, corophiums are tiny invertebrates commonly called “mud shrimp.” A bit of a misnomer since corophiums aren’t actually shrimp, but instead are members of a diverse suborder of crustaceans called “amphipods.”

A just a half an inch long, these little ‘scuds’ scurry around the mudflats and play an important role in their management. Mud shrimp eat phytoplankton and bacteria. These microorganisms excrete a sticky layer on top of the mud that helps hold the sediment together. When the mud shrimp population booms, the marine microbes don’t have as big of an impact. Subsequently, more of the sediment washes away. However, when huge populations of migrating sea birds visit, the tables turn. Corophiums happen to be one of sandpipers favorite foods, and migration takes a lot of energy. When the avian populations use estuaries as their stopover habitat, they munch up a significant amount of the mud shrimp. With their predator gone, the communities of plankton and bacteria make a comeback and add stability to sediments. Because of this powerful influence, corophiums is thought of as a keystone species for estuarine habitats.

Another family in the group “amphipods,” these funky creatures are more commonly called skeleton shrimp. Their reputation is well deserved! They have extremely slender, pale bodies that help them hide among the fine strands of seagrass. To move, they extend and curl their bodies to transition between pieces of seaweed. These funky little shrimp are found in large numbers in the Chesapeake Bay and are a staple organism of estuaries

Estuaries around the world provide a safe haven for fish nurseries. However, in the tropics and subtropics, you can find a very special ecosystem among the estuaries – mangrove forests. Spunky trees that can grow directly in the brackish water of an estuary create villages for all sorts of creatures. Some (sponges, crabs, snook)  live their entire life spans within the mangrove roots, but most fish species use the forests seasonally. During the rainy season, the marine fish can’t tolerate the decrease in salinity and migrate offshore. However, the dry season brings them into the mangroves for a very valuable reason… fish nurseries.

A fish nursery (commercially called hatcheries or fisheries)is a habitat where the juveniles of a species spend their early days of life. These habitats have more plentiful resources and are often more secluded. In the mangrove forests on the coast of Florida, Gray snapper (Lutjanus griseus), red drum (Sniaenops ocellatus), and spotted sea trout (Cynoscion nebulosus) use the protected estuarine habitats as their nursery grounds. These species, in particular, are important to both the sport and commercial fishing industry. Keeping the estuaries healthy and protected means the fish assemblages will be healthy.

Fun Fact: Two-thirds of the United States commercial fish and shellfish spend part of their life cycle in an estuary! 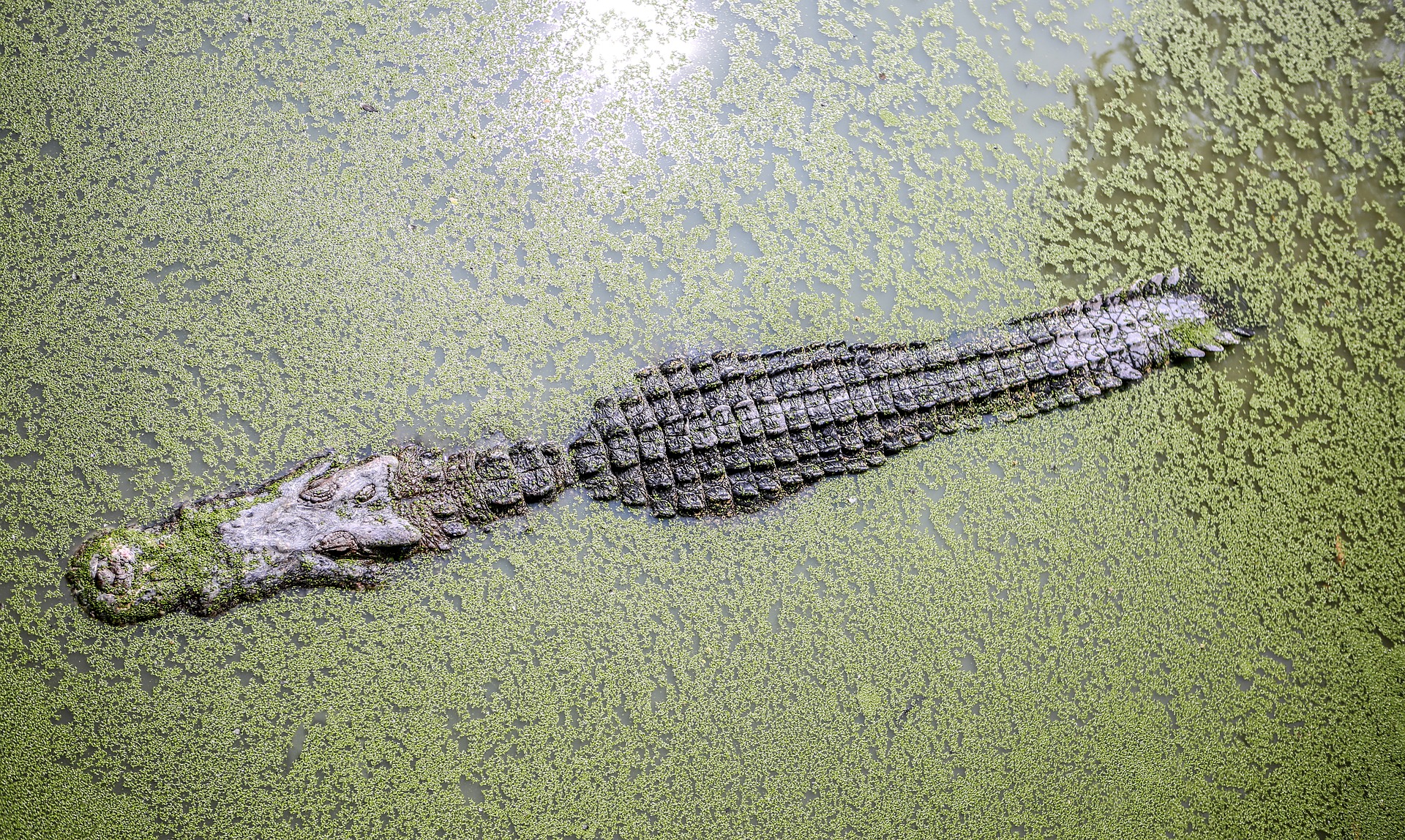 Estuarine crocodiles spend part of their lives in freshwater rivers and part in the salty ocean. Image by Sasin Tipchai from Pixabay.

Many reptile species find their niche in estuaries, including alligators, snakes, lizards, and turtles. In fact, the green sea turtle (Chelonia mydas) and the loggerhead sea turtle (Caretta caretta) use the estuaries as nurseries and spend much of their juvenile life within more protected estuarine zones. However, one reptile really draws the attention as the charismatic predator of the estuaries – the estuarine crocodile (Crocodylus porosus). Juveniles grow up in freshwater rivers. As adults, these massive reptiles can be found swimming far out to sea. They are the largest reptiles alive today, with males reaching up to 20 feet long.

Fun Fact: Estuarine crocodiles can go months without eating! If an estuary dries up or the food source depletes, these mega reptiles will just hunker down and wait for brighter pastures.

Under the influence of so many fine-tuned variables, these ecosystems strike a delicate balance to support all the incredible animal life. But beyond the fascinating estuarine flora and fauna, these ecosystems provide critical ecosystem services with clear community and economic benefits. Unfortunately, the threats of contaminant-filled runoff, pesticides, wetlands filled for development, sea-level rise, and ocean acidification all put estuaries at risk. Luckily, the National Oceanic and Atmospheric Administration (NAOO) established the National Estuarine Research Reserve which helps protect a network of 29 coastal ecosystems.