What is Retrograde Motion? • Earth.com 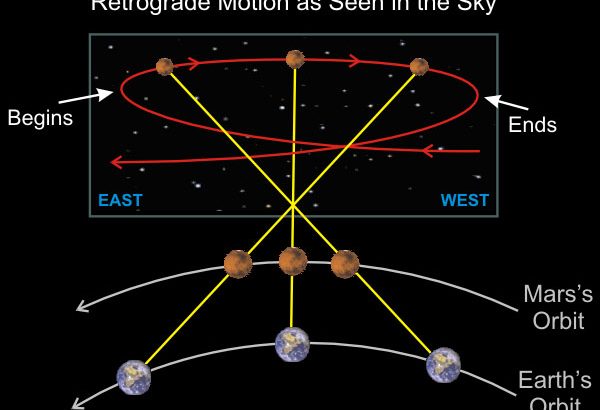 What is Retrograde Motion?

It is the orbital motion of a body in a direction opposite that which is normal to spatial bodies within a given system. ‘Retrograde’ derives from the Latin words retro, backwards, and gradus, step.

In the Solar system, mostly everything rotates in the same sense: all major planets orbit the Sun counterclockwise as seen from the pole star (Polaris). Most planets spin in the same sense, including Earth and the orbital motions of the :

All these motions are called “direct” or “prograde.”

Rotation in the opposite sense is called retrograde. Venus and Uranus spin clockwise, so they have a retrograde rotation. Some small moons orbit clockwise around their planet, and are called retrograde satellites. Some comets and small asteroids orbit the Sun in retrograde orbits. All these are the exception rather than the rule.

When we observe the sky, we expect most objects to appear to move in a particular direction with the time. The apparent motion of most bodies in the sky is from east to west. However, it is possible to observe a body moving west to east, such as an artificial satellite or Space Shuttle that is orbiting eastward.

Retrograde motion should not be confused with retrogradation. The latter term is used in reference to the motion of the outer planets (Mars, Jupiter, Saturn, and so forth). Though these planets appear to move from east to west on a nightly basis in response to the spin of Earth, they are most of the time drifting slowly eastward with respect to the background of stars, which can be observed by noting the position of these planets for several nights in a row.

This motion is normal for these planets, so its name is a direct motion (not retrograde). However, since Earth completes its orbit in a shorter period of time than these outer planets, we occasionally overtake an outer planet, like a faster car on a multiple-lane highway.

When this occurs, the planet we are passing will first appear to stop its eastward drift, and it will then appear to drift back toward the west. This is retrogradation, since the planet seems to be moving in a opposite direction to typical direction for planets. Finally as Earth swings past the the planet in its orbit, it appears to resume its normal west-to-east drift on successive nights.

Mars goes through retrogradation about every 22.5 months. The more distant outer planets retrograde more frequently. The period between such retrogradations is the synodic period of the planet.

This retrogradation puzzled ancient astronomers, and was one reason why they named these bodies ‘planets’ which in Greek means ‘wanderers’ . In the geocentric model of the solar system, they was accounting this motion for by having the planets travel in deferents and epicycles.

In modern astronomy, the term retrograde motion refers to objects which are actually moving in a opposite direction. That is normal to spatial bodies within a given system,as opposed to observed phenomena (retrogradation) such as that described above.

Some significant examples of retrograde motion in the solar system: