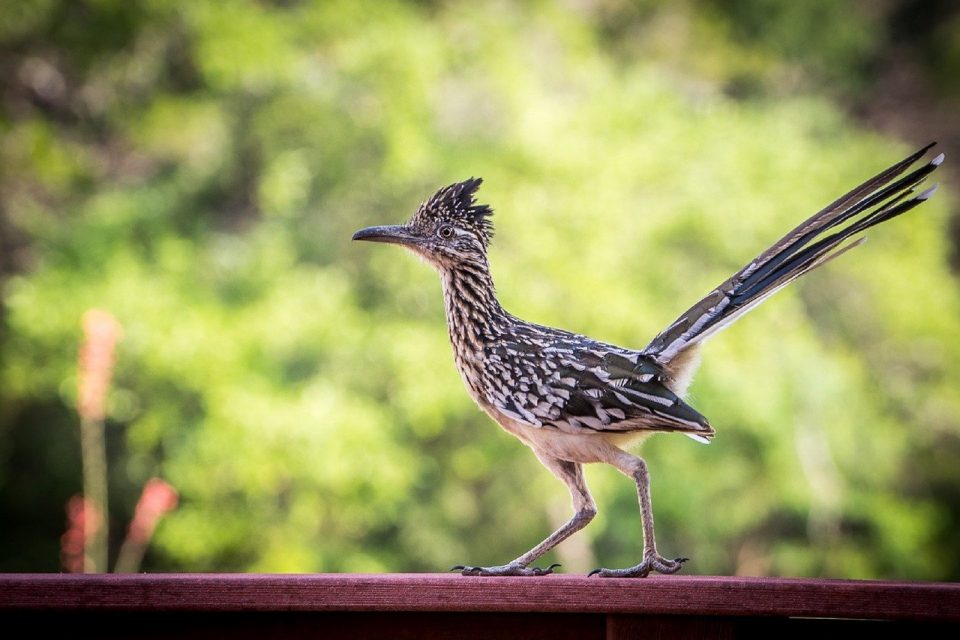 Roadrunners: Where They Live, Etymology, & More

Roadrunners are the most famous bird in the southwest! Whether you picture their characteristic long tails speeding through the desert or imagine the clever cartoon, roadrunners are an easy bird to imagine. But what has given them such a popular reputation? Do they share their habitat with coyotes? Do they actually run on roads? Can they really kill rattlesnakes? Read along, and we’ll answer these questions and more!

How to Identify a Roadrunner

Despite their portrayal along with Wile E. Coyote, roadrunners are not actually blue. So what do they look like? There are a few key parts of identifying birds. We’ll go over each one, so you won’t miss a roadrunner when it crosses your path. 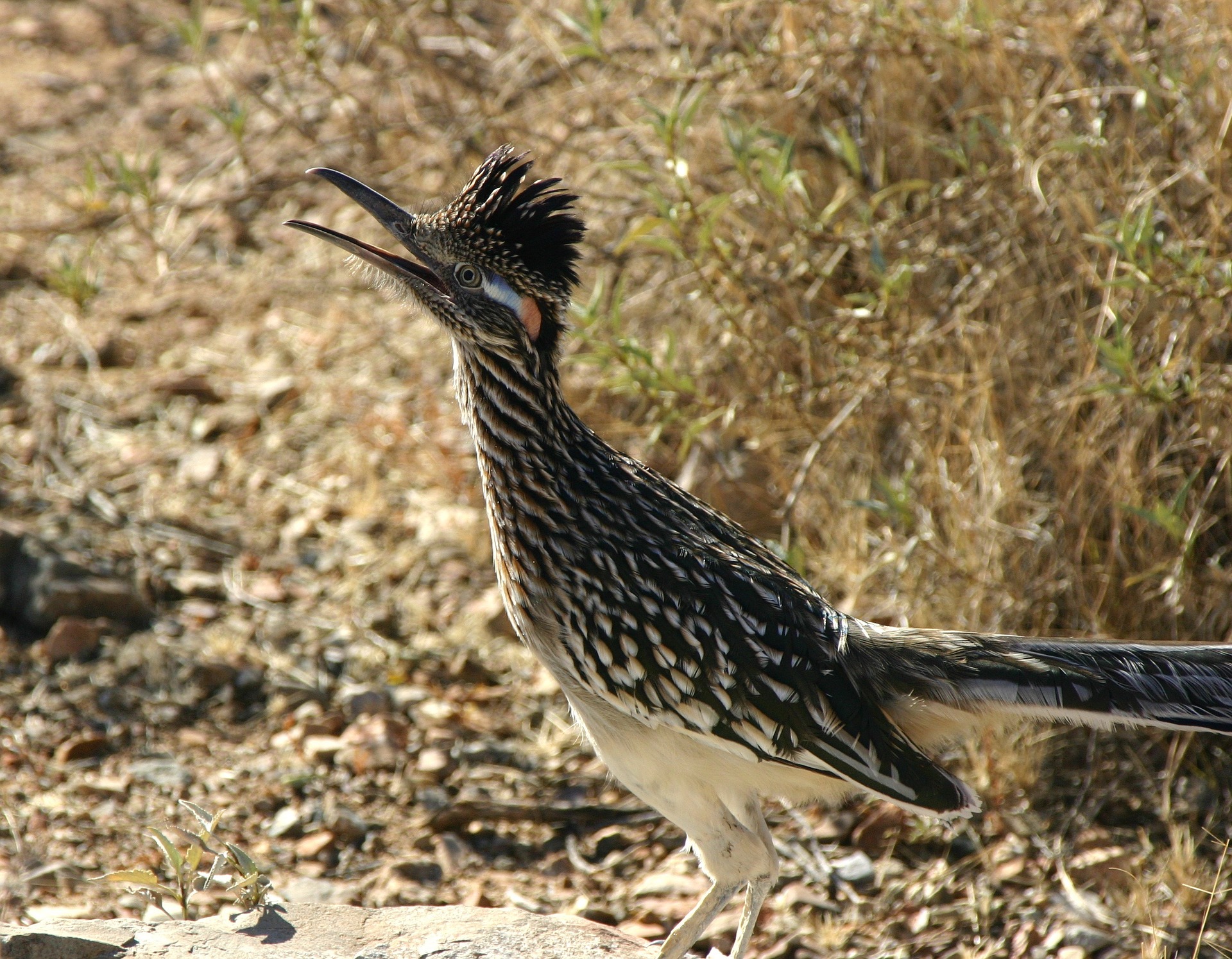 This is one thing that folklore and cartoons got right! The greater roadrunners live across the southwest and Mexico. On the other hand, the lesser roadrunner occupies a more southern range, including southern Mexico and some parts of Central America. The imagery of saguaro cacti and red rock mesas is pretty spot on! With a warming climate, roadrunners are expanding their range to the northeast.

Fun Fact: The Roadrunner is the state bird of New Mexico.

Within their range, roadrunner habitat includes areas that are semi-arid and relatively open. To clarify, this means they prefer desert landscapes with plenty of room to run. They are often found in scrubby areas. Common plants to find in these habitats include creosote, mesquite, tamarisk, and grasslands. Less commonly, you will find them in farmlands or on the edges of suburbia.

It is true that roadrunners share their habitat with coyotes. But unlike the cartoon, the birds aren’t trying to foil the coyote’s plans. In fact, coyotes can run upwards of 40mph, out-racing their feathered opponents every time. What’s more, coyotes, along with hawks and raccoons, will hunt roadrunners. So don’t expect any funny antics between the two species when you visit the southwest.

The rumors are true! Roadrunners get their name because they are often seen rocketing through the scrubland. Long legs whirring and their long tail streaming out behind. In fact, the roadrunner can reach speeds up to 20 mph!

These speedy birds are in the cuckoo family. The roadrunners genus is Geococcyx, which translates to earth-cuckoo. True to this name, they spend most of their time on the ground. Only occasionally will you see a roadrunner perched on a fence post or tree branch. 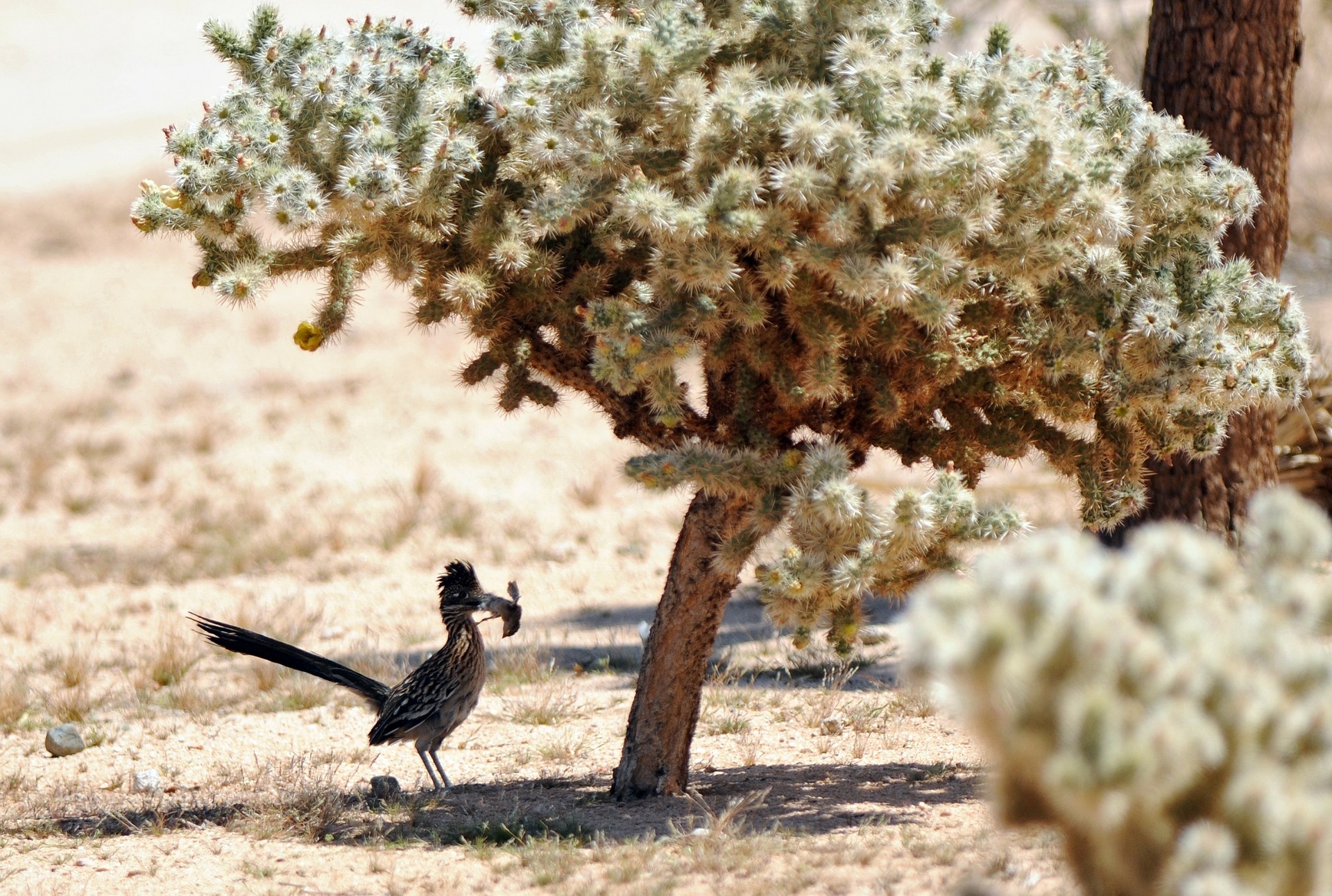 “Roadrunners eat rattlesnakes!” That’s a sentence you might have heard over the past few years. But do these speedy birds really have the heroic battles with rattlesnakes that have become legend?

It’s true, roadrunners can eat venomous animals. This interesting meal preference includes venomous snakes and even scorpions. Think of it as one of their superpowers! Remember, venomous means it’s a creature that injects a toxin with a bite or sting. In fact, roadrunners have been known to kill and eat rattlesnakes. Normally, a pair of birds will make the attack, with one acting as the distraction while the other sneaks up from behind.

However, this behavior is not as common as purported in popular culture. While it happens on occasion, roadrunners prefer smaller, less energy-intensive food for most of their meals. In fact, roadrunners are omnivorous, eating seeds, fruit, insects, other animals, and even carrion (dead animals).

To hunt their prey, roadrunners use their speed! They sneak up behind smaller critters and then sprint to ambush them. Without talons like raptors, these birds use their beaks to kill prey. They sometimes even smash prey against the ground or a rock. 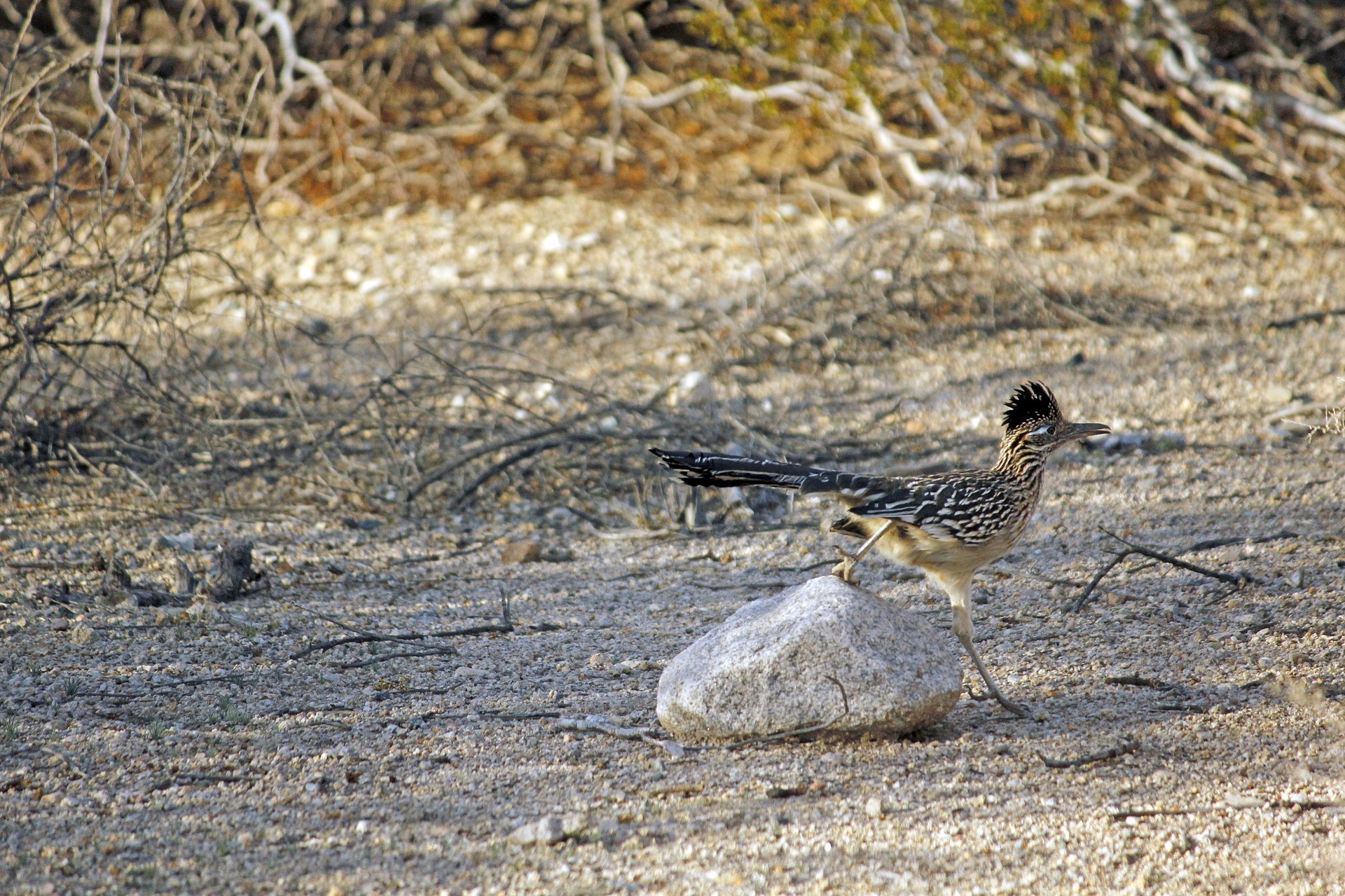 Roadrunners are clearly a symbol of the American southwest. Furthermore, they have always played an important role in Native American and Mexican mythology. For the Hopi and Ancestral Puebloan, they are thought of as medicine birds that have the ability to ward off evil spirits.

Roadrunners have an interesting foot structure. With two toes in the front and two in the back, they have zygodactyl feet. Because of this, they leave X-shaped footprints. If you find roadrunner tracks, you can’t tell which way the bird was running! Native Americans thought of this as a means to escape and avoid evil spirits. Naturally, the X shape began to signify the powerful nature of the bird and has been found in the rock art of many Southwest peoples. Additionally, the Ancestral Puebloans used roadrunner feathers to decorate cradles to give babies spiritual protection.

In Mexico, many tribes considered the roadrunner sacred and would never kill them. For others, eating the meat of the roadrunner would increase strength and boost immunity.

Overall, roadrunners make an impressive bird. Their distinct character has made them an important species throughout cultures and histories. Keep your eyes peeled next time you venture to the southwest!

[Featured Image by skeeze on Pixabay]