What is Salt Marsh? • Earth.com 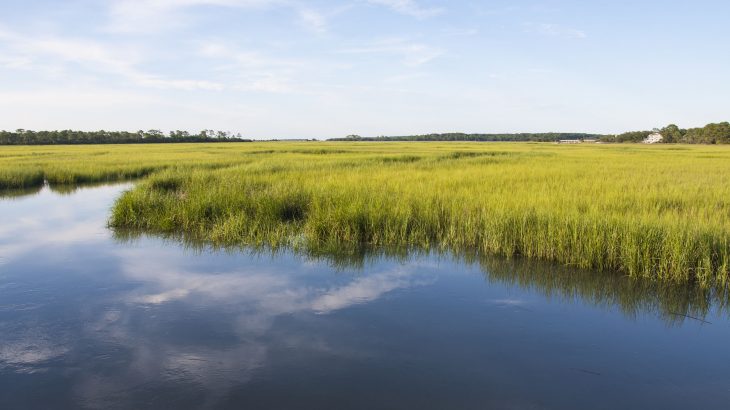 What is Salt Marsh?

A salt marsh, also otherwise known as a coastal salt marsh or a tidal marsh. It is a coastal ecosystem in the upper coastal intertidal zone that lies between the land and the open salt water or brackish water that is routinely flooded by the tides. It’s dominated by dense stands of salt-tolerant plants, for example, herbs, grasses, or low shrubs. These plants originate from all around the globe and are important to the stability of the salt marsh in trapping and binding sediments. Salt marshes play a big role in the aquatic food web and the deliverance of nutrients to the coastal waters. They support terrestrial animals and supply coastal protection as well.

The salt marshes come about on low-energy shorelines in temperate and high-latitudes which can be stable or rising, or even sinking if the sedimentation rate goes beyond the subsidence rate. These shorelines commonly feature mud or sand flats. Alternatively known as tidal flats, which are nourished with sediment from the inflowing streams and rivers. These characteristically include sheltered environments including embankments, estuaries, and the leeward side of barrier islands and spits. In the tropics and sub-tropics they are replaced by mangroves; a region that is different from a salt marsh in the way that instead of herbaceous plants. They are dominated by salt-tolerant trees.

The majority of the salt marshes have a low topography with low elevations but an infinite and extensive area, making them largely accepted for human populations. Salt marshes are generally located in the midst of different landforms based on their geomorphologic and physical settings. Such marsh landforms incorporate deltaic marshes, back-barrier, estuarine, open coast, embayments and drowned-valley marshes. Deltaic marshes are associated with large rivers where many of them occur in Southern Europe, for example

They are widespread within the rivers of the Mississippi Delta located in the United States also. In New Zealand, the majority of the salt marshes come about at the head of estuaries in regions where the wave action is low but the sedimentation rate is high.

Such marshes are found in Awhitu Regional Park located in Auckland, the Manawatu Estuary, and the Avon-Heathcote Estuary in Christchurch. Back-barrier marshes are susceptible to the reshaping of barriers in the landward side of which they have been created. They are frequent along the majority of the eastern coast of the United States and the Frisian Islands. Large and shallow coastal embayments are able to hold salt marshes with example including Morecambe Bay and Portsmouth located in Britain and the Bay of Fundy located in North America.

Salt marshes are occasionally incorporated in lagoons, and the difference isn’t very noticeable; the Venetian Lagoon located in Italy. It consists of these types of animals and or living organisms that belong to this ecosystem.

The coastal salt marshes can be differentiated from terrestrial habitats via the daily tidal flow that takes place and continuously floods the region. It’s a vital process in the deliverance of sediments, plant water supply, and nutrients to the marsh. At higher elevations within the upper marsh zone, there is much less tidal inflow, causing the salinity levels to decrease. Soil salinity within the lower marsh zone is quite constant because of everyday annual tidal flow. However, within the upper marsh, inconsistency in the salinity levels is shown as a result of less frequent flooding and climate dissimilarities. Rainfall has the ability to reduce salinity levels and evapotranspiration holds the ability to increase the levels during dry periods.

Consequently, there are microhabitats that are populated by a variety of species of flora and fauna that are dependent on their physiological abilities. The flora of a salt marsh is distinguished into levels in accordance with the plants’ individual tolerance of salinity and water table levels. The vegetation that is found at the water must have:

while plants that are located further inland within the marsh can occasionally face dry, low-nutrient circumstances. It’s been found that the upper marsh zones limit some species via competition and the lack of protection for the habitat, while lower marsh zones are established by the ability of plants to tolerate physiological pressure such as salinity, low oxygen levels, and water submergence, for example.