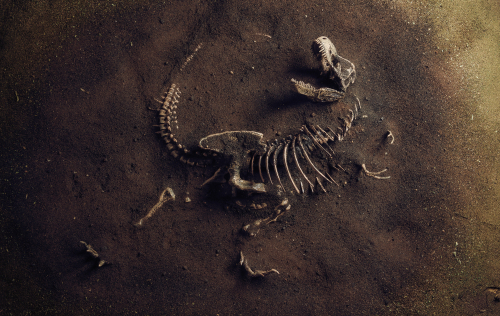 The Chicxulub disaster marks one of Earth’s greatest mass extinctions in which an asteroid hit the Gulf of Mexico, devastating the planet. Known best for being the downfall of the dinosaurs, the Chicxulub impact crater is one of the largest craters in the world. The date of impact has been memorialized by a thin band of clay surrounding layers in the Earth’s crust called the Cretaceous-Paleogene boundary. Separating the Cretaceous period from the Paleogene, this crater signifies more than just a flip of a calendar. The apocalyptic events that transpired have been documented in the rock layers around the globe, just waiting for a geologist to uncover them. Here, we dive into the causes and the fallout of the disaster.

What Caused the Chicxulub Diasater?

As we examine the most monumental moments in Earth’s history, we can’t jump in our time machines and zoom back 65 million years. To understand the cause of the Chicxulub disaster, we turn to chemistry, geology, and paleontology. To start, let’s get out the periodic table because the entire theory behind the Chicxulub disaster has a chemical foundation.

Physically, the Cretaceous-Paleogene boundary is delineated by a thin band of clay, unique to the geologic layers above and below it. The clay demarcation has an unusually high concentration of the element iridium. In fact, the K-T boundary has 1,000 times more iridium than all the oceans! While rarely found in the Earth’s crust, both meteorites and the Earth’s interior are iridium-rich. The prevalence along the K-T boundary led geologists to two predominant theories. Either the band formed during a worldwide cataclysmic volcanic eruption or from an extra-terrestrial source. Luckily, thanks to scientific advances, more evidence quickly made itself apparent, and the iridium pendulum swung toward outer space.

The discovery of the Chicxulub impact crater advanced the conversation around the K-T boundary. First noted off the coast of Haiti, several clues on the seafloor helped push the dialogue to support the meteor theory. Physically, the crater spans 93 miles across and 12 miles deep, the impact zone is buried underneath the Yucatan Peninsula off the coast of Mexico.

If a giant depression in the Earth’s crust isn’t enough to convince you of a meteor impact event, there’s more geologic evidence that goes hand-in-hand. This time, instead of an other-worldly element, an uncommon form of a very common rock raised the red flag. Quartz is a mineral found all over the Earth. Rosey, smokey, clear, or opaque, quartz crystals have a varied but predictable diversity. Each quartz molecule is made from one silicon atom and two oxygens. Normally, these molecules arrange themselves in a regular lattice. However, when hit with absurdly high pressure and temperatures, quartz gets a bit funky. Undergoing a series of phase transitions, shocked quartz has a disorderly structure, with lines of molecules intersecting at irregular angles. Unsurprisingly, an expedition of geophysicists with the International Ocean Discovery Program (IODP) discovered shocked quartz in the rock core around the Chicxulub crater at the K-T boundary!

In conclusion, Given the prevalence of iridium, the large impact zone, and the correlation with a layer of shocked quartz, scientists believe that a meteorite caused the Chicxulub disaster and created the K-T boundary.

Where did the meteor come from? Looking at celestial patterns, physicists have also developed a theory about the origins of the meteor in question, and it looks like we have Jupiter to blame. The giant planet has a proportionally giant gravitational field. Every once in a while Jupiter pulls debris from the Oort cloud at the outskirts of our solar system and whips them toward the center, called a “sungrazer.” In astronomic terms, “every once in a while” means every 250-730 million years, so we don’t have to worry about a similar event any time soon. Subsequently, the tidal force of the sun breaks the meteors into smaller pieces and increases their speed.

As luck would have it, one of these pieces hurtled toward the Earth over 60 million years ago. An estimated six miles in diameter, the asteroid hit Mexico’s Yucatan Peninsula in a 100 million megaton explosion. While six miles may seem pitiful compared to the size of a planet, its impact was truly global.

Immediate Effects of the Chicxulub Disaster

The Chicxulub disaster caused a series of events that changed the world forever. While the global situation became dire, the region around the impact site got completely demolished.  Using evidence from fossilized plant debris, sediment deposits, core samples, ripple marks, and other geological clues, scientists have been able to piece together the initial aftermath of the Chicxulub impactor.

The blast of the impact alone created devastating plasma that reached temperatures of over 10,000 degrees, destroying everything in the crater’s radius.

If lifeforms avoided being literally squished, the asteroid strike created shockwaves and high-velocity winds sent across the Gulf of Mexico called an air blast would be next to get them.

Along with the air blast, tsunamis rolled over the Mexican coast and southeastern North America. Estimated to have been up to 300 meters tall, the waves rolled inland up to 100 kilometers before depositing mainland sediment back onto the ocean floor.

The asteroid impact also caused seismic activity equivalent to a magnitude 10 earthquake. The seismic pulse also created a tectonic formation unique to craters over 2 km wide. When the meteor hit, seismic waves moved in and out of the crater simultaneously. The colliding movement caused an uplift of rocks to the center of the basin which then collapsed into a circle of mountains, called a peak ring.

Global Effects of the Chicxulub Disaster

In addition to the catastrophes that erupted at the impact site and surrounding region, the effects of the Chicxulub disaster spread worldwide. Not only was their impact global, but also the extent of the damages wasn’t brief. In many cases, the consequences of the crater lasted years, ultimately changing the makeup of the world’s ecosystems.

After colliding into the Yucatan Peninsula, the meteor exploded into a cloud of scorching debris. Scattered over the earth, the flaming fall-out lit wildfires around the globe. Evidenced by a layer of ash, these fires likely released significant amounts of greenhouse gases into the atmosphere.

When the meteor hit the Gulf of Mexico, all the soot and debris from the impact shot back up into the atmosphere. Initially, the influx of debris shocked the atmosphere with firey temperatures. Additionally, the impact of the asteroid released sulfurous gas. The combination of heat and sulfur started a chain of chemical reactions causing acid rain.

Depending on their size, the particulates stayed suspended in the atmosphere for up to a year. Consequently, they acted as a giant cloud, blocking the sunlight. As a result, average temperatures decreased around the globe.

After the initial global cooling event, the greenhouse gases released during the impact had the opposite effect. Based on measurements of potential CO2 release to growth rates seen in fossilized leaves, scientists estimate that temperatures likely rose between 1.0 and 7.5°C and lasted for 100,000 years.

Overview: After the initial wave of devastation from the Chicxulub impact, the airborne soot and debris, along with a release of greenhouse gases caused worldwide wildfires, acid rain, and global cooling and warming events that completely disrupted life on Earth.

Though scientists publish new studies each year on the events of the Chicxulub disaster, there’s one thing we know for sure. Below the K-T boundary, dinosaurs dominated the Earth. Above it, only avian dinosaurs remain. When the Chicxulub asteroid hit the Earth, it marked the end of the Cretaceous period and opened up thousands of niches to mammals, reptiles, and amphibians.

There have only been five recorded mass extinction events in Earth’s history. Of course, species go extinct all the time, but this usually coincides with the evolution of more complex organisms. The five mass extinctions, on the other hand, cause a dieoff of at least 40% of species due to extreme environmental factors.

Shifts in the Food Web: the Nail in the Dinosaur’s Coffin

The Chicxulub disaster notoriously caused the dinosaur extinction. But not just the dinosaurs suffered. Pterosaurs (flying reptiles) and mosasaurs (large marine reptiles) went extinct as well. While the tsunamis and acid rain surely took out a good number of critters, they couldn’t have been enough to wipe out over 75% of the living plants and animals. That accolade goes to the long-term impacts of the meteor.

Initially, plants couldn’t adapt to the dramatic shifts in climate combined with blocked sunlight from the particulates.  The impact on plant life had a domino effect on the global food web. While many plants have seeds and pollen that could outlast the most severe conditions in a dormant state, the animal kingdom was not so lucky. Starving and suffering, the largest animals took the hardest hit. Small mammals, avian dinosaurs, and reptiles found a way to survive the devastation. When the climate stabilized, the surviving lineages adapted, grew, and developed into diverse evolutionary trees.  The events that marked the end of the dinosaurs were the origin of life as we know it today.