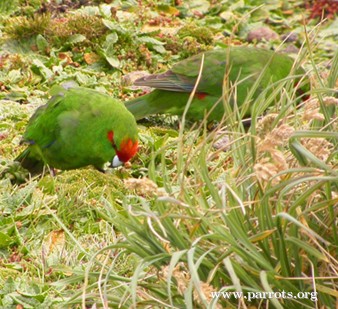 Cyanoramphus cookii (=novaezelandiae c.) NatureServe Explorer Species Reports -- NatureServe Explorer is a source for authoritative conservation information on more than 50,000 plants, animals and ecological communtities of the U.S and Canada. NatureServe Explorer provides in-depth information on rare and endangered species, but includes common plants and animals too. NatureServe Explorer is a product of NatureServe in collaboration with the Natural Heritage Network. ITIS Reports -- ITIS (the Integrated Taxonomic Information System) is a source for authoritative taxonomic information on plants, animals, fungi, and microbes of North America and the world. FWS Digital Media Library -- The U.S. Fish and Wildlife Service's National Digital Library is a searchable collection of selected images, historical artifacts, audio clips, publications, and video. The Norfolk parakeet, also called Tasman parakeet, Norfolk Island green parrot or Norfolk Island red-crowned parakeet, is a species of parrot in the family Psittaculidae. It is endemic to Norfolk Island. The red-crowned parakeet (Cyanoramphus novaezelandiae), also known as red-fronted parakeet and by its Māori name of kākāriki, is a small parrot from New Zealand. It is characterised by its bright green plumage and the red pattern on its head. This versatile bird can feed on a variety food items and can be found in many habitat types. It used to be classified as near threatened as invasive predators had pushed it out of its historical range but it is now at least concern.

No recovery information is available for the Norfolk Island parakeet.
Back to full archive