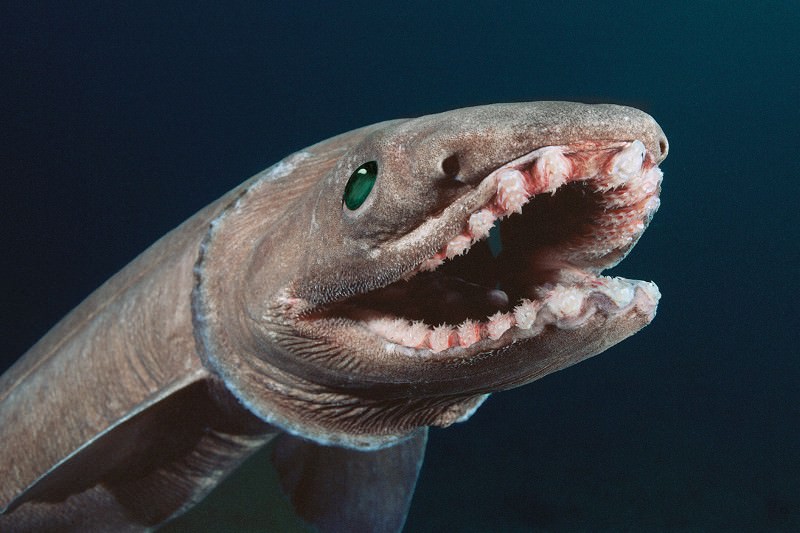 A Frilled shark has a  nick name –  “the living fossil,” since this shark belongs to a primitive species that has changed very little over millions of years.

Also the frilled shark feeds mainly on cephalopods, as well as bony fishes and other sharks . Frilled Shark litter sizes vary from two to fifteen, and there is no distinct breeding season. Frilled sharks are occasional bycatch in comer.

Also The head appears to be all mouth, capped off at the throat region with six frilled gills, hence its name.cial fisheries, but have little economic value. The first gill slit cuts right across the throat, making it look as if someone sliced it with a knife there. Because the frilled shark bears such a striking resemblance to an eel, ichthyologists once assumed it navigated the water by wriggling

Aside from its unmistakable toothiness, the mouth looks larger than that of other sharks because its jaws terminate at the back of the fish’s head instead of underneath the skull.When open, the frilled shark’s mouth reveals 300 trident-shaped teeth aligned in 25 rows.  A more accurate nickname is “the living fossil,” since this shark belongs to a primitive species that has changed very little over millions of years.

Even after modern humans put a dent in the populations of certain sea dwellers, frilled sharks thrived, since fishermen rarely trawled near the seafloor. With the advent of fishing equipment that goes from 400 to 4,200 feet below the water’s surface, captures of this shark as by-catch have sadly become more common in recent decades.– September 1, 2004