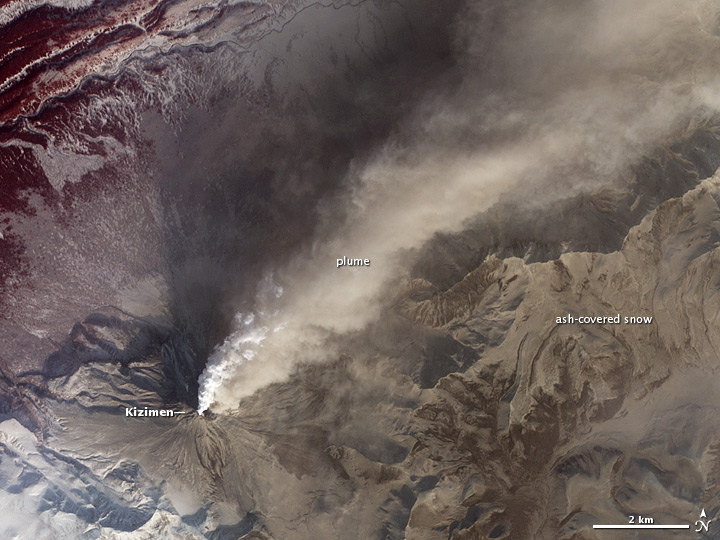 The red outline at the volcano’s summit is a hotspot where MODIS has detected unusually high surface temperatures. Kizimen’s plume blows toward the southwest and southeast, likely the result of changing winds. In the southeast, the plume appears as a faint gray-beige veil over the ocean. An expanse of snow west of the volcano looks gray, perhaps the result of a recent ashfall from Kizimen.

Rising to an altitude of 2,376 meters (7,795 feet), Kizimen Volcano is a stratovolcano composed of hardened lava, solifidied ash, and rocks ejected by earlier eruptions. The volcano has experienced multiple periods of long-term growth, and lava domes overlap at the summit.Kizimen (Russian: Кизимен) is a stratovolcano in the southern part of Kamchatka Peninsula, Russia.

The volcano was in a dormant state since an eruption in 1929, but on 2 September 2009 it was reported by Georgina Cooper for the Reuters news agency that the crater lake temperature had risen 10 degrees Celsius in a week and plumes of steam were rising from its flanks.] The activity continued throughout 2010, with the formation of new fumaroles reported in November.Seismic activity and ash emission continued to build over the following weeks, and in January 2011 a hotspot was recorded, indicating the presence of lava. In early February 2011 the volcano sent a column of ash several kilometres high.

In April 2011, it was reported that the volcanic activity and ash were threatening the endangered wild reindeer of the area.