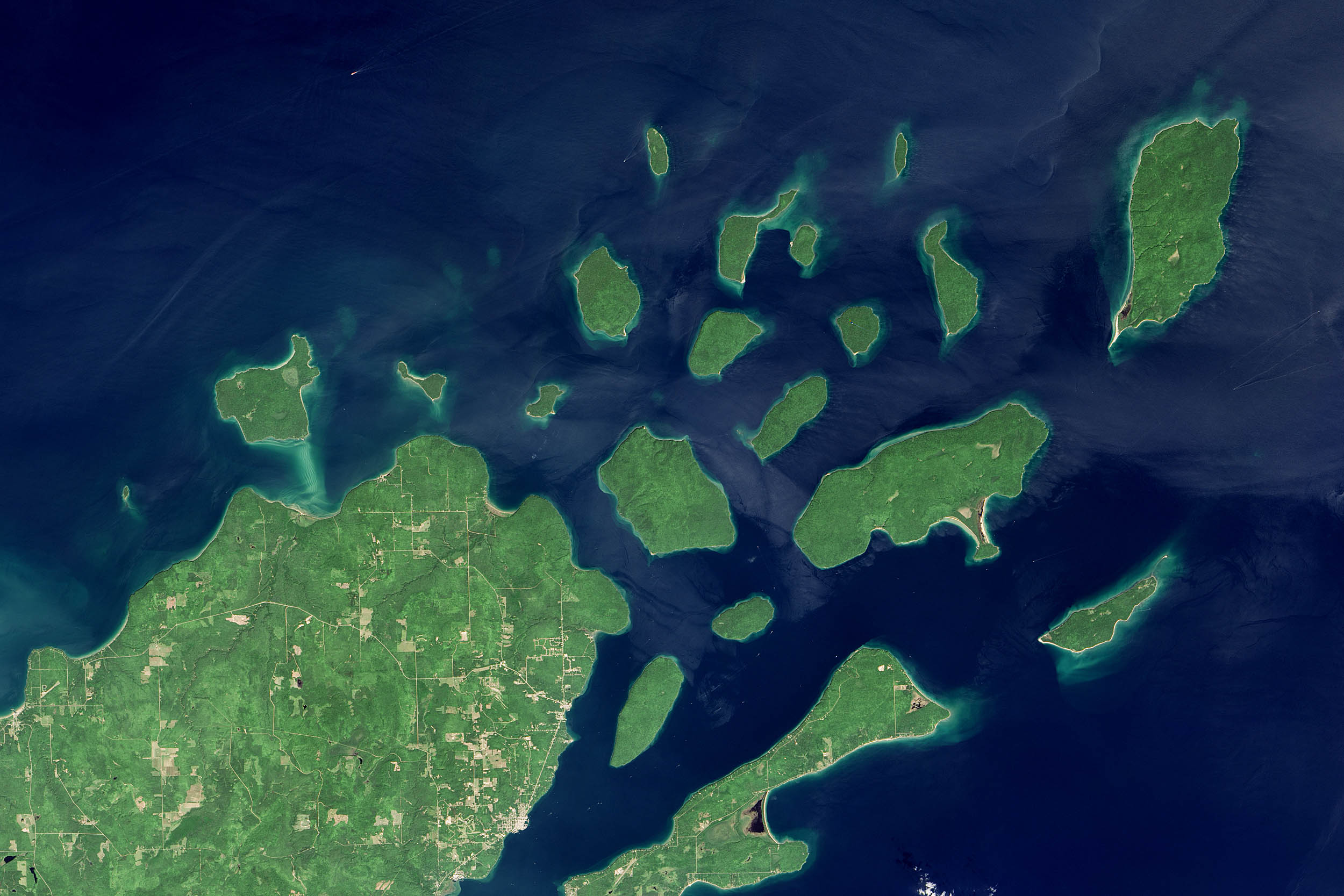 At the northern tip of Wisconsin, where the land reaches into the cold deep of Lake Superior, a light shines in the darkness. Actually, there are a bunch of lights.

Apostle Islands National Lakeshore includes 21 islands and a strip of mainland at the top of Wisconsin. Management of the islands by the National Park Service (NPS) began in September 1970. More lighthouses stand within this parkland than in any other NPS property.

Author F. Ross Holland wrote in Great American Lighthouses: “Within the boundaries of Apostle Islands National Lakeshore is the largest and finest single collection of lighthouses in the country.” The oldest, Old Michigan Island Lighthouse, was placed into service in 1857 as an aid to ships crossing Lake Superior. Today there are five lighthouses and four light towers spread across Sand Island, Raspberry Island, Devil’s Island, Outer Island, Michigan Island, and Long Island.

The Operational Land Imager (OLI) on Landsat 8 captured this image of the Apostle Islands on August 14, 2015. All of the islands pictured are part of the park except Madeline Island; that island includes a state park and the only year-round settlements of people.

Besides the lighthouses, the area is famous for its shoreline cliffs, sea caves, and other rock formations. Red sandstone was deposited a billion years ago during the late Pre-Cambrian Era, and it has been carved and sculpted for millions of years by rising and falling water levels and by waves of advancing and retreating glaciers. Glaciers have also dropped an abundance of till and flour here. Wind and water have ground the rock into sands that aggregate in spits, sandbars, mounds (tombolos), and some of the lake’s most pristine beaches. In some places, freshwater rock pools provide unusual habitat for amphibious life and insects.

The Apostle Islands, so named by Jesuit missionaries during colonial days, have seen their share of farming and logging over the past few centuries. But today, most of the islands have been reforested naturally, and some stands of old-growth forest remain.