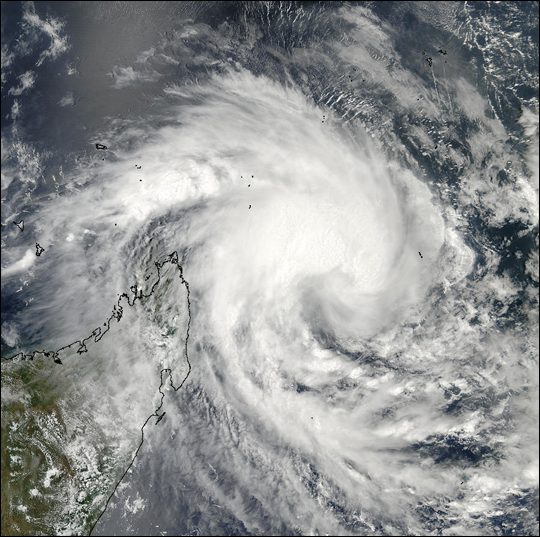 With sustained Cyclone 16S Off Madagascar winds of 84 km per hour (52 mph), Tropical Cyclone 16S has hovered off Madagascar’s northeastern coast for the last couple of days. This true-color image of the storm was acquired on February 10, 2003, by the Moderate Resolution Imaging Spectroradiometer (MODIS) aboard NASA’s Aqua satellite. The high-resolution image available here is 500 meters per pixel. Visit the MODIS Rapid Response Team, for a copy of this scene at MODIS’ full resolution of 250 meters per pixel.

The nation comprises the island of Madagascar (the fourth-largest island in the world) and numerous smaller peripheral islands. Following the prehistoric breakup of the supercontinent Gondwana, Madagascar split from the Indian subcontinent around 88 million years ago, allowing native plants and animals to evolve in relative isolation.