Dust Storm in Egypt and Sudan 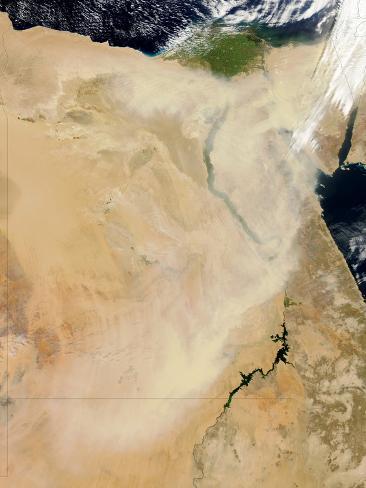 An intense dust storm moved quickly over Sudan and Egypt towards Saudi Arabia on July 15, 2010. These photo-like images show the storm’s movement over a three-hour period. The top image was acquired by the Moderate Resolution Imaging Spectroradiometer (MODIS) on NASA’s Terra satellite at 11:10 a.m. local time. The lower image is from the MODIS sensor on NASA’s Aqua satellite, acquired at 2:20 p.m. local time.

In the time that elapsed between the two images, the cloud of dust expanded out in all directions. The storm’s movement is most evident on the eastern front over the Red Sea. The cloud of dust seemed to expand in the west as well; however, the storm may simply have intensified, picking up more east-blowing dust later in the day.

The large images are the highest-resolution versions of the images. Both the morning and afternoon images are available in a variety of additional resolutions from the MODIS Rapid Response Team.