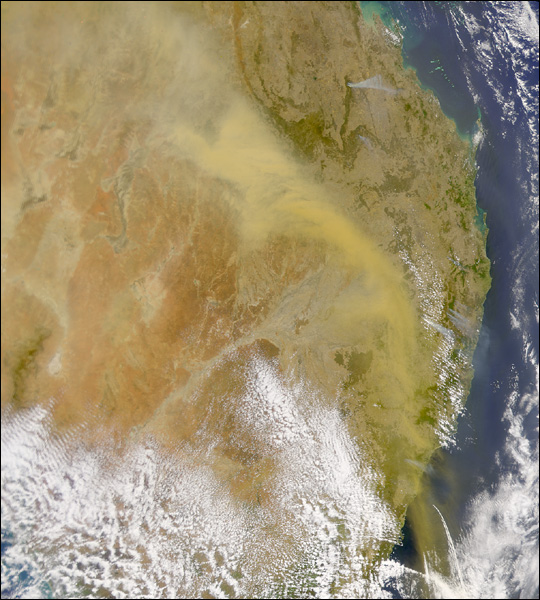 Dust Storm in Idaho plumes mingled with clouds in southeastern Idaho in early September 2010. The Moderate Resolution Imaging Spectroradiometer (MODIS) on NASA’s Aqua satellite captured this natural-color image on September 5, 2010. Midway between Craters of the Moon National Monument and Idaho Falls, but slightly north of both, the dust plumes arise from two clusters of source points. The southern cluster gives rise to a larger plume, which blows toward the northeast and mingles with clouds. The clouds could be associated with the same weather pattern that stirred the dust.

Around the lava fields and around the dust plumes, however, a patchwork of green and tan indicates agricultural fields.Idaho prior to European settlement was inhabited by Native American peoples, some of whom still live in the area. In the early 19th century, Idaho was considered part of the Oregon Country, an area disputed between the U.S. and the United Kingdom. It officially became U.S. territory with the signing of the Oregon Treaty of 1846, but a separate Idaho Territory was not organized until 1863, instead being included for periods in Oregon Territory and Washington Territory. Idaho was eventually admitted to the Union on July 3, 1890, becoming the 43rd state. Idaho (/ˈaɪdəhoʊ/ (listen)) is a state in the northwestern region of the United States. It borders the state of Montana to the east and northeast, Wyoming to the east, Nevada and Utah to the south, and Washington and Oregon to the west. To the north, it shares a small portion of the Canadian border with the province of British Columbia. With a population of approximately 1.7 million and an area of 83,569 square miles (216,440 km2), Idaho is the 14th largest, the 12th least populous and the 7th least densely populated of the 50 U.S. states. The state’s capital and largest city is Boise.