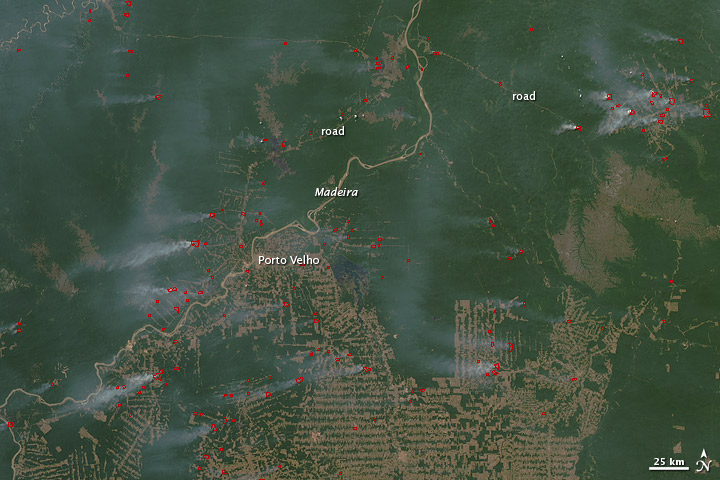 On August 7, 2010, fires burned along the Madeira River in the vicinity of Porto Velho, the capital of Rondônia, Brazil. The Moderate Resolution Imaging Spectroradiometer (MODIS) on NASA’s Aqua satellite captured this natural-color image the same day.

Red outlines indicate high surface temperatures associated with actively burning fires, and pale gray smoke plumes arise from most of the hotspots. At first glance, the placement of the fires might appear random, but a close look indicates that the fires burn close to cleared lands, particularly near roads. The characteristic herringbone pattern of deforestation spreads across much of this image, especially in the south. Many of the fires burn along the fringes of such cleared areas.

Roads—indicated by mostly straight, thin, tan-colored lines—emerge from the Madeira River Valley near top of the image. One road extends to the east, and a significant cluster of fires burns around the cleared lands pushing out from that road. Another road extends from the river valley toward the southwest, intersecting with the river valley again near Porto Velho. Fires also burn along the cleared areas near that road.

In the Amazon, fire is perhaps the foremost means of clearing land, but such fires occasionally burn out of control, threatening parks, crops, and homes. Just as humans set fires to clear land, hot and dry conditions can exacerbate such fires, as well as encourage the spread of wildfires. In mid-August 2010, wildfires were burning throughout Brazil, according to news reports.

To see a time series of image of Amazon deforestation, visit the Earth Observatory’s World of Change: Amazon Deforestation article.