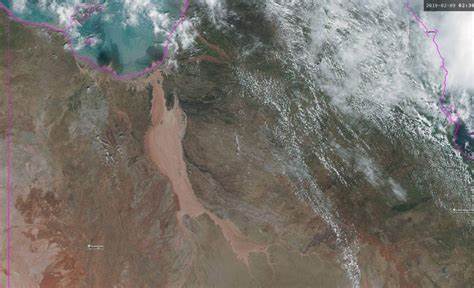 The swollen rivers of floods in Western Turkey cut dark blue ribbons across the brilliant green landscape of this false-color Moderate Resolution Imaging Spectroradiometer (MODIS) image. Starting on January 24, 2004, a rare winter storm blanketed Western Turkey with snow. The equivalent of a month’s precipitation fell around Istanbul in just 24 hours. By February 7, when the Aqua satellite acquired this image, most of the snow had melted, filling the rivers that flow into the Aegean Sea. The Meric (Evros) River in the top left corner, and the Menderes River in the bottom third of the image seem particularly full. Only patches of snow, which appear light blue in this image, remain in the higher elevations.

Turkey , officially the Republic of Turkey (Turkish: Türkiye Cumhuriyeti , is a transcontinental country located mainly on the Anatolian peninsula in Western Asia, with a small portion on the Balkan peninsula in Southeast Europe. East Thrace, the part of Turkey in Europe, is separated from Anatolia by the Sea of Marmara, the Bosphorous and the Dardanelles (collectively called the Turkish Straits). Turkey is bordered by Greece and Bulgaria to its northwest; Georgia to its northeast; Armenia, the Azerbaijani exclave of Nakhchivan and Iran to the east; and Iraq and Syria to the south. Istanbul is the largest city while Ankara is the capital. Approximately 70 to 80 per cent of the country’s citizens identify as Turkish. Kurds are the largest minority at anywhere from 15 to 20 percent of the population.