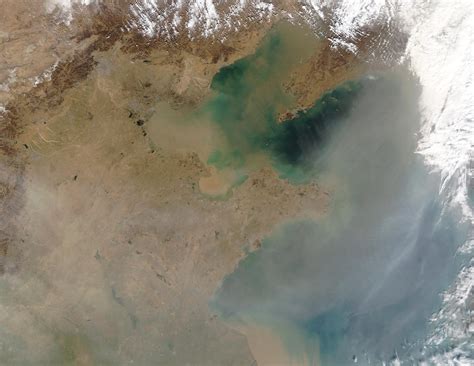 A thick layer of haze obscures the coastline in this image of haze over Eastern China. Beijing (ChinaÂ´s capital and second largest city) is located in the upper left portion of the image, while Shanghai (China’s largest city and the word/s largest port) is located in the lower right portion of the image. Haze is a generic term for visible air pollution, and can consist of dust, smoke, and other particulate matter.

As China has grown as an economic power. Therefore its demand for electricity from mostly coal-fired power plants and for automobiles has increased dramatically. This has lead directly to increases in sulfur dioxide, nitrogen dioxide, soot, and other atmospheric pollutants. Haze and smog are major health concerns; according to the American Heart Association, they have been linked to heart disease and stroke.

They may also be associated with reduced immune system response and cause damage to the lining of the lungs. In order to improve air quality, China is working with international partners, including the United Nations and the United States, to expand renewable resources, such as wind, solar, and hydroelectric power.