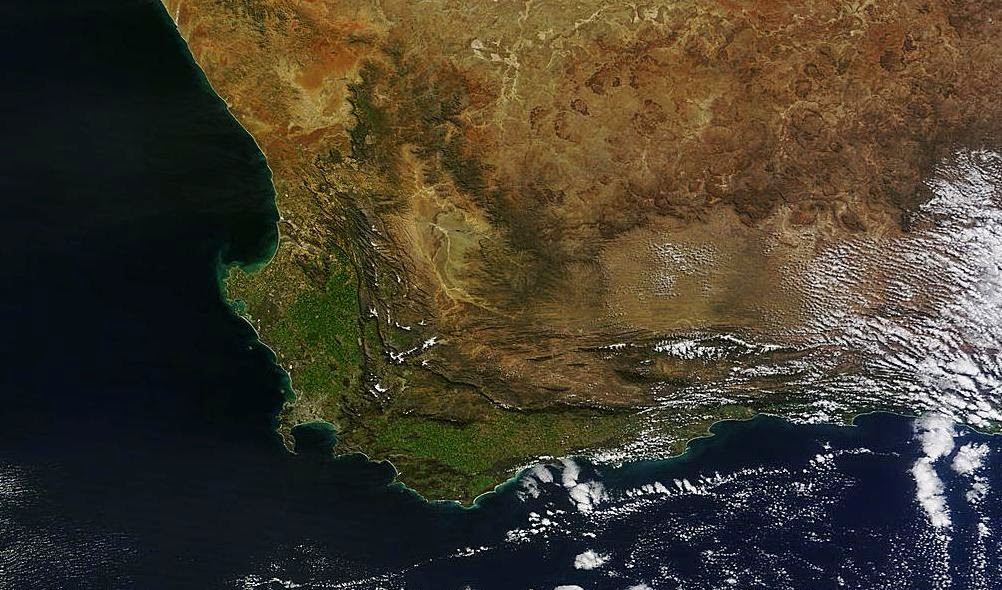 Heavy snow fell over eastern South Africa and Lesotho during the final week of July 2004. As can be seen in the above Moderate Resolution Imaging Spectroradiometer (MODIS) image, acquired on July 29, by the Aqua satellite, the snow extended much further than the peaks of the mountains where it typically falls during the Southern Hemisphere’s winter. The spine of the mountain range is highlighted by the snow, forming a slanted question mark against the brown winter landscape. The unusual snowfall trapped hundreds of motorists in mountain passes and knocked out power and telephone service across the region, according to local news reports.

The above MODIS image has a resolution of 250 meters per pixel. It is available in additional resolutions from the MODIS Rapid Response Team.

South Africa, officially the Republic of South Africa (RSA), is the southernmost country in Africa. It is bounded to the south by 2,798 kilometres (1,739 mi) of coastline of Southern Africa stretching along the South Atlantic and Indian Oceans; o the north by the neighbouring countries of Namibia, Botswana, and Zimbabwe; and to the east and northeast by Mozambique and Eswatini (Swaziland); and it surrounds the enclaved country of Lesotho.South Africa is the largest country in Southern Africa and the 24th-largest country in the world by land area and, with over 58 million people, is also the world’s 24th-most populous nation. It is the southernmost country on the mainland of the Old World or the Eastern Hemisphere. About 80 percent of South Africans are of Bantu ancestry, divided among a variety of ethnic groups speaking different African languages, nine of which have official status. The remaining population consists of Africa’s largest communities of European, Asian (Indian),and multiracial (Coloured) ancestry.