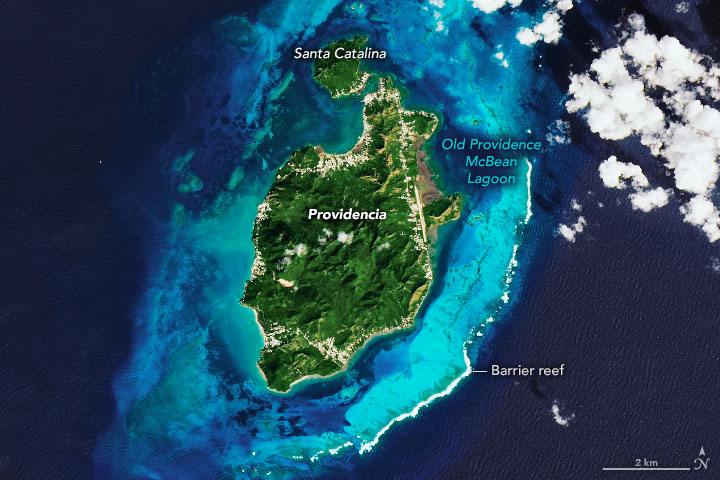 Today’s Image of the Day from NASA Earth Observatory features the island of Providencia in the southwestern Caribbean Sea.

“Providencia was once an island sanctuary for pilgrims and privateers. Today, it is mostly a refuge of quieter Caribbean life amid raw natural beauty,” reports NASA.

Providencia has an area of about seven square miles. The island is a territory of Colombia, yet sits closer to the Nicaraguan coast in the San Andres archipelago.

“The island is one of the centerpieces of the Seaflower Biosphere Reserve, a UNESCO Marine Protected Area noted for its marine biodiversity. The peaks at the center of the island are remnants of an ancient volcano,” says NASA.

“Not much has been written about the indigenous history of the island, but Europeans arrived around the start of the 17th century. Dutch pirates were the first of many generations of privateers to use the island as a safe harbor and launching point for raids on Central America and the Caribbean Islands. In 1631, English pilgrims arrived on the Seaflower (a sister ship to the Mayflower) with hopes for more agricultural success than their fellows to the north in Plymouth, Massachusetts.”

“But it was not long before the island was also forcibly populated with indentured servants and slaves. It also wasn’t long before Providencia became the site of one of the first known slave rebellions in a British colony. Eventually, control of the island was taken by the Spanish, and then again by pirates such as Henry Morgan.”

Today, Providencia has a population of about 5,000 people across seven main villages. The economy is driven by fishing, farming, and limited tourism. 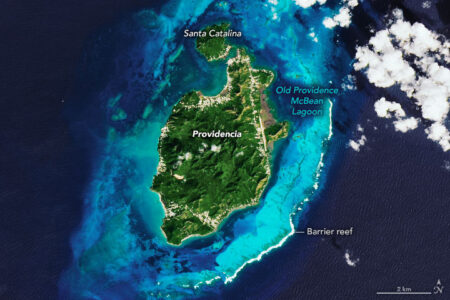