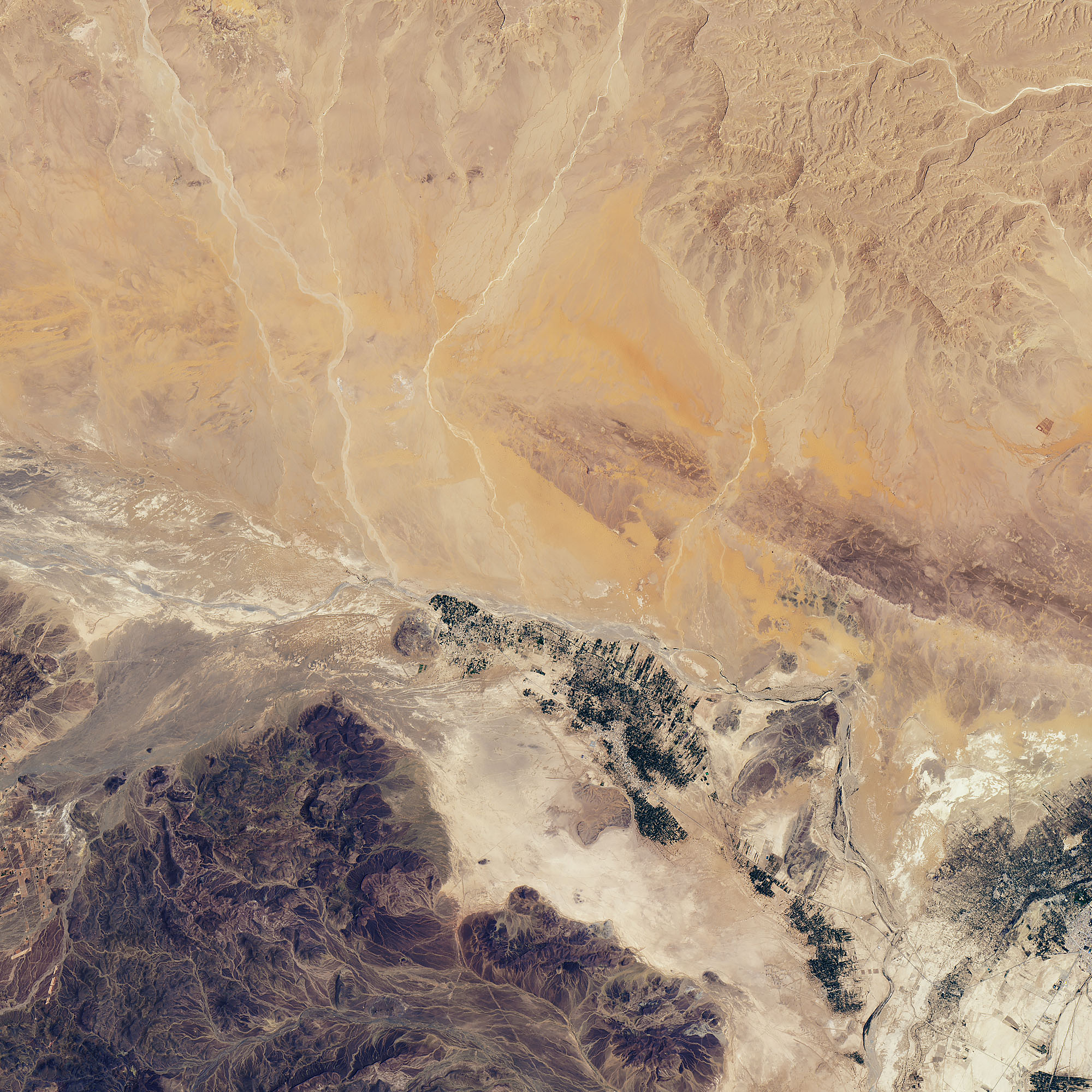 In Landsat images of the Tafilalt oasis of southeastern Morocco, dozens of thin lines run across the desert from the Anti-Atlas mountains toward the town of El Jorf. These are qanats (khettaras in Moroccan)—ancient underground water channels designed to transport water down slopes without active pumping.

Most wells involve digging a vertical shaft downward until it reaches the water table, and then hauling or pumping the water up to the surface. Qanats consist of gently inclined horizontal tunnels dug into sloping terrain. When the horizontal shaft hits the water table, gravity causes water to only flow downhill in the channel toward outlets at the base of the slope.

While the channels that convey the water lay below the surface, the access shafts used for construction and maintenance are visible above ground. The access shafts are often dug near or through large earthen mounds made of material excavated during construction of the vertical shafts and channels.

From above, these earthen mounds in the Tafilalt oasis form long chains that appear as relatively continuous lines at Landsat’s 30 meters per pixel spatial resolution. On July 2, 2016, the Operational Land Imager (OLI) on Landsat 8 captured this image of several qanats leading toward El Jorf. Cultivated land (green)—much of it covered with date palms—surrounds the town. In higher resolution imagery or ground photography, it is easier to see individual access shafts and earthen mounds. The photograph below, taken by David Lynch, shows access shafts without earthen mounds along two qanats that converge near the village of Fezna.

The qanats in the Tafilalt oasis date back to 14th century and have provided water for towns and villages for several centuries. Widespread uses of diesel pumps and vertical wells began to lower the water table in the 1970s, causing some of the qanats in this region to go dry. Today, about half of the 69 qanats in Tafilalt still supply water. One recent analysis concluded that the depth of the groundwater table has dropped 50 percent over the past 40 years, and the amount of date palm grown in the Tafilalet oasis has declined by 50 percent.