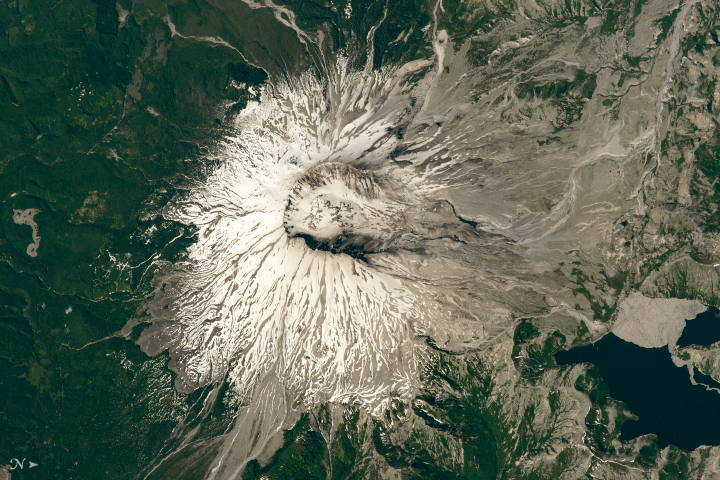 Today’s Image of the Day from NASA Earth Observatory features Mount St. Helens, where a devastating volcanic eruption killed 57 people and thousands of animals on May 18, 1980. The catastrophic eruption of Mount St. Helens caused a huge impact on the city.

The volcanic event, which was the most destructive in the history of the United States, caused the largest landslide ever recorded and triggered the eruption of highly-pressured molten lava and rock. A column of ash was shot 80,000 feet into the air and drifted across 12 states. Nearly 150 square miles of forest were either damaged or destroyed by the blast.

This image was captured on June 25, 2017 from the International Space Station.

Mount St. Helens (known as Lawetlat’la to the indigenous Cowlitz people, and Loowit or Louwala-Clough to the Klickitat) is an active stratovolcano located in Skamania County, Washington, in the Pacific Northwest region of the United States. It is 50 miles (80 km) northeast of Portland, Oregon and 96 miles (154 km) south of Seattle, Washington. Mount St. Helens takes its English name from the British diplomat Lord St Helens, a friend of explorer George Vancouver who made a survey of the area in the late 18th century. The volcano is located in the Cascade Range and is part of the Cascade Volcanic Arc, a segment of the Pacific Ring of Fire that includes over 160 active volcanoes. This volcano is well known for its ash explosions and pyroclastic flows. Also The catastrophic eruption of Mount St. Helens is also a well known eruption across the nation.