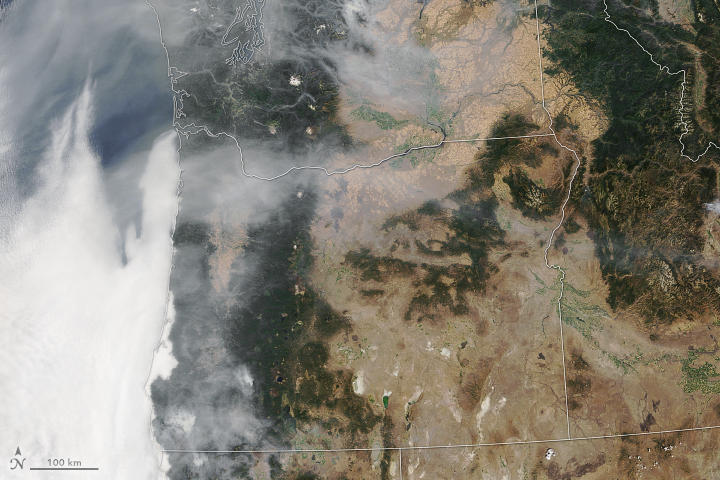 Today’s Image of the Day from NASA Earth Observatory shows the massive amount of smoke produced by fires in Oregon. Wildfire smoke hovers over Oregon shown in image above.

According to the National Interagency Fire Center, nine large fires were burning across the state on August 15, 2018.

This image was captured on August 14th by the Moderate Resolution Imaging Spectroradiometer (MODIS) on NASA’s Terra satellite.

Oregon (/ˈɒrɪɡən/ (listen) ORR-ih-gən)is a state in the Pacific Northwest region on the West Coast of the United States. The Columbia River delineates much of Oregon’s northern boundary with Washington, while the Snake River delineates much of its eastern boundary with Idaho. The parallel 42° north delineates the southern boundary with California and Nevada.
Oregon was inhabited by many indigenous tribes before European traders, explorers, and settlers arrived. An autonomous government was formed in the Oregon Country in 1843 before the Oregon Territory was created in 1848. Oregon became the 33rd state on February 14, 1859. Today, at 98,000 square miles (250,000 km2), Oregon is the ninth largest and, with a population of 4 million, 27th most populous U.S. state. The capital, Salem, is the second most populous city in Oregon, with 169,798 residents. Portland, with 647,805, ranks as the 26th among U.S. cities. The Portland metropolitan area, which also includes the city of Vancouver, Washington, to the north, ranks the 25th largest metro area in the nation, with a population of 2,453,168. Wildfire smoke hovers over Oregon