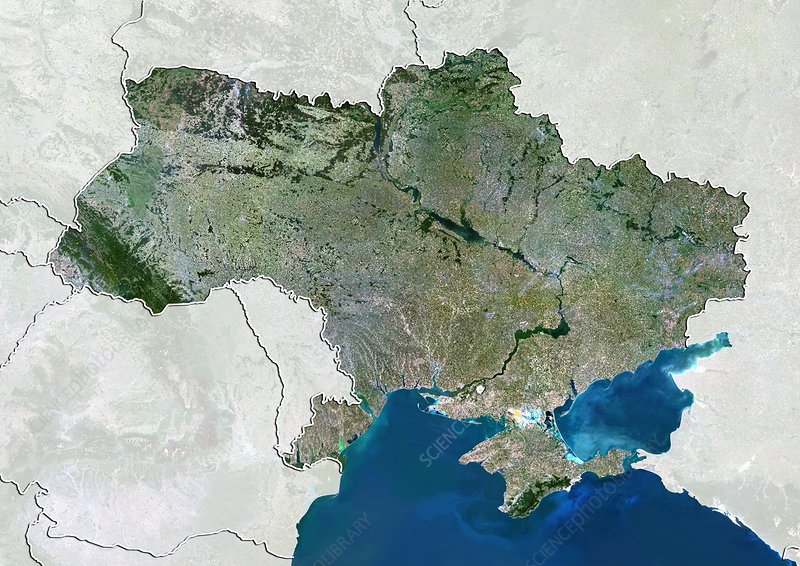 The Dnieper River flows south through the Ukraine into the northern end of the Black Sea, shown here in this true-color Aqua MODIS image from September 15, 2004. On either side of the river, red dots mark the locations of fires scattered throughout the country’s rich farmlands. The fires, some of which show smoke plumes drifting off in the atmosphere, are likely agricultural in nature, given the season, lack of tree-cover, and light smoke.
Both the Black Sea and the Sea of Azov show swirls of color in their waters. These colors are likely to be blooms of aquatic plants like phytoplankton or algae, though some might be sediment from the Dnieper and other rivers. In the case of the Azov, the cloudiness of the water is more likely to be from sediment; the sea is a maximum of 13 meters deep, and getting shallower as the Don and Kuban rivers empty sediment as well as fresh water into it. The Kerch Strait connects the Sea of Azov to the Black Sea in the lower right of the image.

The territory of modern Ukraine has been inhabited since 32,000 BC. During the Middle Ages, the area was a key centre of East Slavic culture, with the powerful state of Kievan Rus’ forming the basis of Ukrainian identity. Following its fragmentation in the 13th century, the territory was contested, ruled and divided by a variety of powers, including Lithuania, Poland, Austria-Hungary, the Ottoman Empire and Russia. A Cossack republic emerged and prospered during the 17th and 18th centuries, but its territory was eventually split between Poland and the Russian Empire.