The Yukon Delta on the west coast of Alaska • Earth.com 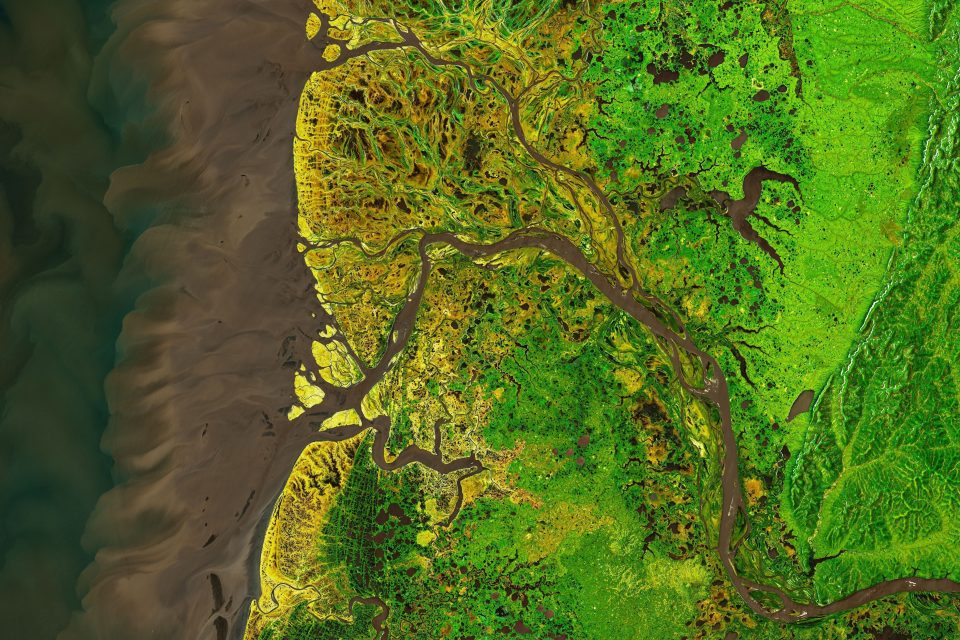 Today’s Image of the Day from NASA Earth Observatory features one of the world’s river largest deltas, the Yukon-Kuskokswim Delta.

The composite photo is made up of a natural-color imager of water and a false-color image of land.

The Yukon River can be seen as it meets the Bering Sea along the west coast of Alaska.

Gerald Frost is a senior scientist at ABR Inc. Environmental Research and Services in Fairbanks, Alaska.

“The Yukon Delta is an exceptionally vivid landscape, whether viewed from the ground, from the air, or from low-Earth orbit,” said Frost.

“To me, one of the interesting things about the delta is that it is a highly transitional area, with some elements of Arctic tundra and some of boreal forest.”

According to NASA, it is easy to distinguish between areas of live vegetation in green, land that is bare or contains dead vegetation in light brown, and the network of sediment-rich rivers and ponded flood water that appear in dark brown.

Lawrence Vulis, a graduate student at the UC Irvine, noted that the delta would have appeared much more inundated immediately following the melting of snow and ice a few weeks prior to this image.

“Interestingly, tall shrubs have expanded a lot on the delta in recent decades, and the moose have followed,” said Frost. “Today, the delta has one of the highest moose densities in the state of Alaska.”

Previous studies have shown that the modern Yukon Delta is only a few thousand years old. Vulis said that this young age is incredible to think about. “We are used to thinking about relatively ancient landscapes, but modern river deltas have only formed in the last 10,000 to 8,000 years since global sea level has stabilized,” said Vulis.

“The Yukon and other Arctic deltas are thought to be particularly vulnerable to climate change due to the roles of permafrost and ice in shaping these deltas.”

The image was captured on May 29, 2021 by the Operational Land Imager (OLI) on Landsat 8

How do bees execute such flawless turns?
LATEST IMAGES
Unusual bloom in the Arabian Sea