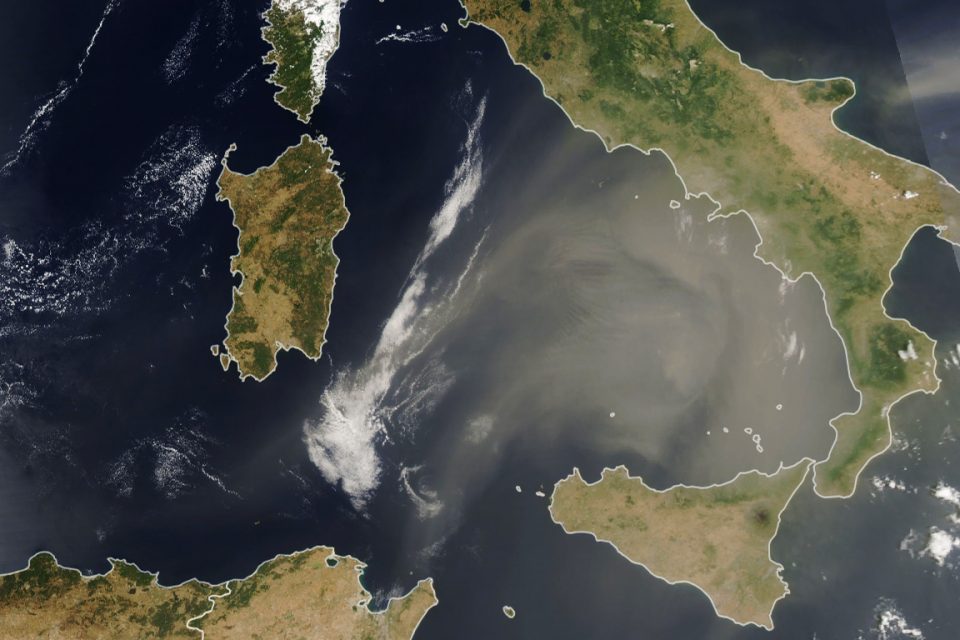 Saharan dust arrives in Europe Today’s Image of the Day from NASA Earth Observatory shows dust from the Sahara moving toward Italy.

According to NASA, the dust appears to have traveled from Algeria and Mali, blowing across more than 600 miles) due to a large mesoscale convective weather system.

Saharan dust arrives in Europe Millions of tons of dust particles are lofted out of northwest Africa each year. These particles are rich in iron and phosphorus. They fertilize distant soils, as well as the surface waters of the Atlantic.  North America is a continent entirely within the Northern Hemisphere and almost all within the Western Hemisphere. It can also be described as the northern subcontinent of the Americas. It is bordered to the north by the Arctic Ocean, to the east by the Atlantic Ocean, to the southeast by South America and the Caribbean Sea, and to the west and south by the Pacific Ocean. Because it is on the North American Tectonic Plate, Greenland is included as part of North America geographically.  North America covers an area of about 24,709,000 square kilometers (9,540,000 square miles), about 16.5% of the Earth’s land area and about 4.8% of its total surface. North America is the third-largest continent by area, following Asia and Africa, and the fourth by population after Asia, Africa, and Europe. In 2013, its population was estimated at nearly 579 million people in 23 independent states, or about 7.5% of the world’s population. North America was reached by its first human populations during the last glacial period

On the other hand, the airborne particles can negatively impact air quality and reduce visibility.

The Copernicus Atmosphere Monitoring Service reports that the dust will continue traveling further north into Europe this week.

The image was captured on June 22, 2021 by the the Moderate Resolution imaging Spectroradiometer (MODIS) on NASA’s Aqua satellite.