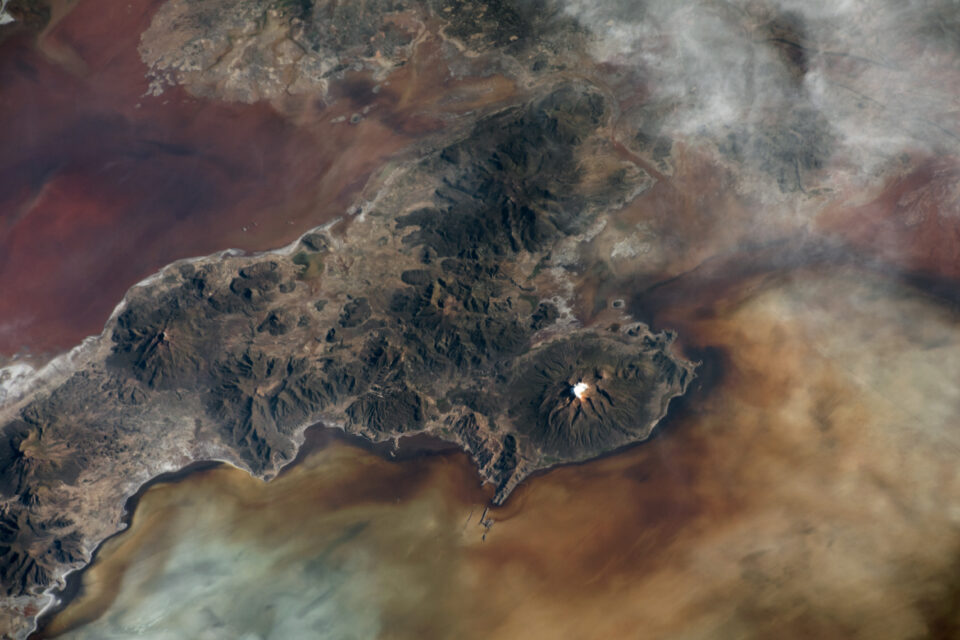 Today’s Image of the Day from NASA Earth Observatory features an astronaut view of the Tunupa Volcano, a dormant volcano in southwestern Bolivia. The volcano is located on a peninsula between two of Bolivia’s largest salt flats – Salar de Uyuni and Salar de Coipasa.

“Tunupa Volcano is located at the center of the Southern Altiplano, or the Andean Plateau, and rises as high as 5.3 kilometers (3.3 miles) in elevation,” says NASA. “The volcano is a composite cone – a large, complex volcano that is often covered by lava flows, pyroclastic and mudflow deposits, and domes. Last active about 1.4 million years ago, Tunupa is now considered dormant.”

“The flanks of the volcano’s cone are incised by valleys that were eroded by ancient glaciers and stream flows. Domes and lava flows appear on the eastern side of Tunupa, and the volcano is adjacent to other eroded volcanic fields and craters, including Jayu Khota and Titivilla.”

According to NASA. the salt flats are typically a bright white color when viewed from orbit – but during Bolivia’s rainy season, rivers can carry sediment rich in microbes and dark-colored volcanic minerals onto the flats.

The image was captured on February 5, 2022 by a member of the Expedition 66 crew.