Typhoon Maria heads toward the eastern coast of China • Earth.com

Typhoon Maria heads toward the eastern coast of China 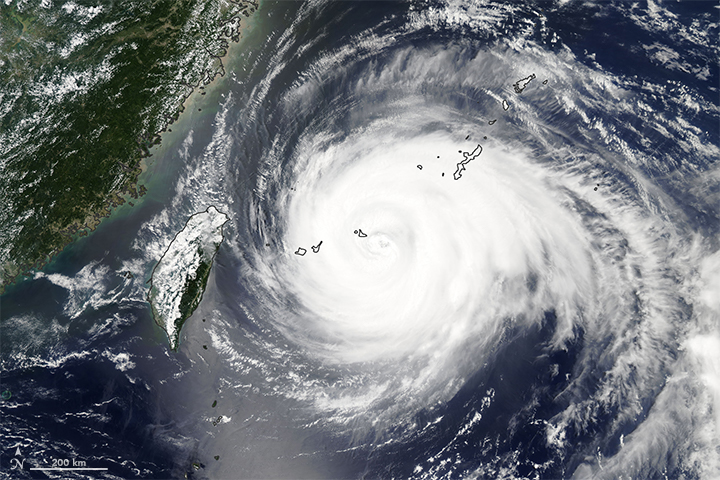 Today’s Image of the Day from NASA Earth Observatory shows Typhoon Maria as it blazes a massive trail across the ocean toward eastern China. Typhoon Maria heads toward the eastern coast of China

The storm system went through one of the most accelerated transformations ever recorded, intensifying from a tropical storm to a super typhoon in just one day. Typhoon Maria heads toward the eastern coast of China

Although the storm has been downgraded from a super typhoon, it will still make a powerful landfall somewhere around the Fujian and Zhejiang provinces of China on July 11.

Maria is expected to bring wind gusts of over 120 miles per hour and torrential rains, and over 140,000 people have been evacuated from low-lying and coastal regions.

This image of Typhoon Maria was captured on July 10 by the Moderate Resolution Imaging Spectroradiometer (MODIS) on NASA’s Aqua satellite. Typhoon Maria, known in the Philippines as Typhoon Gardo, was a powerful tropical cyclone that affected Guam, Taiwan, and China. Developing into the eighth named tropical storm of the northwest Pacific Ocean and impacting the Mariana Islands on July 4, Maria strengthened into the fourth typhoon of this season and underwent extremely rapid intensification the next day, due to favorable environmental conditions. The typhoon reached its first peak intensity on July 6; subsequently, Maria weakened due to an eyewall replacement cycle, but it re-intensified and reached its second peak intensity on July 8. Later, it started to gradually weaken due to colder sea surface temperatures. After hitting the Yaeyama Islands and affecting Taiwan on July 10, Maria ultimately made landfall over Fujian, China, early on July 11, before dissipating on the next day.