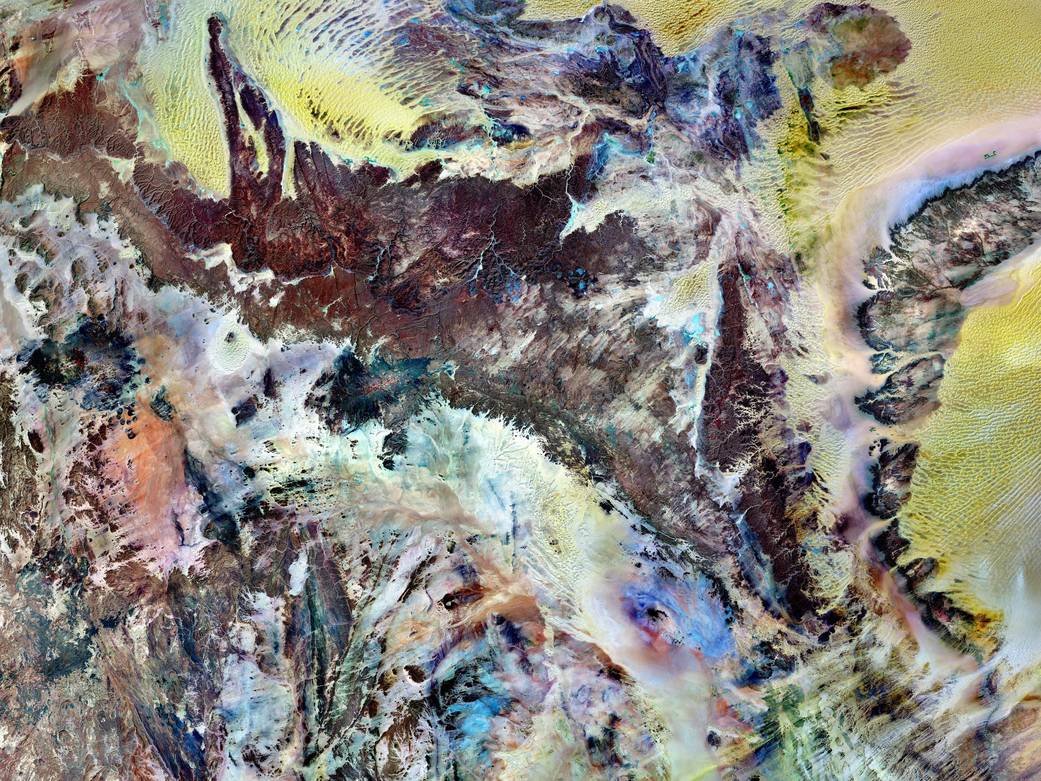 Tassili n’Ajjer National Park, a part of the Sahara Desert, has a bone-dry climate with scant rainfall, yet does not blend in with Saharan dunes. Instead, the rocky plateau rises above the surrounding sand seas. Rich in geologic and human history, Tassili n’Ajjer is a United Nations Educational, Scientific and Cultural Organization (UNESCO) World Heritage Site, and covers 27,800 square miles (72,000 square kilometers) in southeastern Algeria.

This image from 2000 was made from multiple observations by the Landsat 7 satellite, using a combination of infrared, near-infrared and visible light to better distinguish between the park’s various rock types. Sand appears in shades of yellow and tan. Granite rocks appear brick red. Blue areas are likely salts. As the patchwork of colors suggests, the geology of Tassili n’Ajjer is complex. The plateau is composed of sandstone around a mass of granite.

Over the course of Earth’s history, alternating wet and dry climates have shaped these rocks in multiple ways. Deep ravines are cut into cliff faces along the plateau’s northern margin. The ravines are remnants of ancient rivers that once flowed off the plateau into nearby lakes. Where those lakes once rippled, winds now sculpt the dunes of giant sand seas. In drier periods, winds eroded the sandstones of the plateau into ‘stone forests’ and natural arches. Not surprisingly, the park’s name means ‘plateau of chasms.’

Humans have also modified the park’s rocks. Some 15,000 engravings have so far been identified in Tassili n’Ajjer. From about 10,000 B.C. to the first few centuries A.D., successive populations also left the remains of homes and burial mounds.