Wildfires are burning in 18 Mexican states 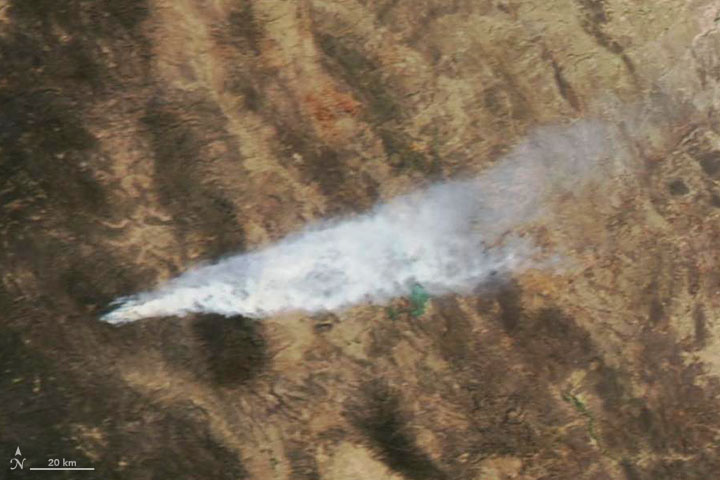 Wildfires are burning in 18 Mexican states Today’s Image of the Day from NASA Earth Observatory shows a large wildfire burning in a forest located west of Cienega de Escobar in Durango, Mexico.

The photo was captured on April 17, 2019 by the Moderate Resolution Imaging Spectroradiometer (MODIS) on NASA’s Aqua satellite two days after it was detected.

Mexico (Spanish: México [ˈmexiko] (listen); Nahuatl languages: Mēxihco), officially the United Mexican States (UMS; Spanish: Estados Unidos Mexicanos, EUM [esˈtaðos uˈniðoz mexiˈkanos] (listen), lit. Mexican United States), is a country in the southern portion of North America. It is bordered to the north by the United States; to the south and west by the Pacific Ocean; to the southeast by Guatemala, Belize, and the Caribbean Sea; and to the east by the Gulf of Mexico.

Covering almost 2,000,000 square kilometers (770,000 sq mi), the nation is the fifth largest country in the Americas by total area and the 13th largest independent state in the world. With an estimated population of over 129 million people, Mexico is the tenth most populous country and the most populous Spanish-speaking country in the world, while being the second most populous nation in Latin America after Brazil. Mexico is a federation comprising 31 states plus Mexico City (CDMX), which is the capital city and its most populous city. Other metropolises in the country include Guadalajara, Monterrey, Puebla, Toluca, Tijuana, and León. Wildfires are burning in 18 Mexican states and causing a horrible disaster.